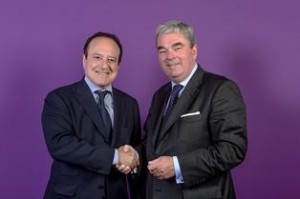 Calendars defined for the next four years

Union des Grands Crus de Bordeaux (UGCB) and Vinitaly have signed an agreement to coordinate their events in order to help buyers and media from around the world optimise their attendance at two of the main events in the wine calendar.

Bordeaux – Verona, 26th June 2013 – Well aware of the needs of the main players of the world of wine, top management at UGCB and Vinitaly have jointly decided to harmonise their calendars to avoid any overlapping of dates between “Semaine des Primeurs” in Bordeaux and Vinitaly in Verona, the two leading events traditionally held until now at the beginning of April.

In this context, the respective management teams agreed on timetables for the next four years and the two events will consequently be held on the following dates:

Commenting on this important decision, Giovanni Mantovani, General Director of Veronafiere, said: “In times of market globalisation, France and Italy of wine have managed to cross fences with this exemplary initiative in the interests of the entire system. Starting from reciprocal acknowledgement of the importance of the two events, UGCB and Vinitaly acted with realism, professionalism and common sense in a context of maximum effectiveness.”

On his part, Olivier Bernard, President of UGCB, highlighted: “The main concern for both our organisations is to satisfy the expectations of our customers, be they European, American or Asian. It was our duty to provide effective solutions and visitors will now be able to attend both Vinitaly in Verona and “Semaine des Primeurs” in Bordeaux.”