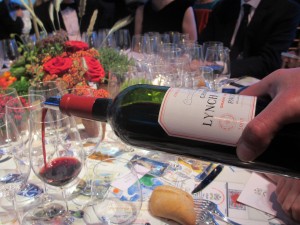 Stretching over some 100 hectares in the commune of Pauillac, the vineyards of Lynch-Bages lie entirely upon the soil of choice for great wines, formed along the estuary by the alluvia from the gravel of Médoc. The property sits among favourably designed hillcrests located south and southwest of the city. This particular topography allows for both a natural drainage of soils to the river and, with help of the water table in shallow areas, a fine feeding of water for the vines.

The 2005 vintage is one of our greatest vintages of recent decades. 2005 vintage characteristics in a nutshell:
• A warm summer,
• Near-drought conditions,
• Harvest remained largely free of rainfall, and the fruit was brought in by relaxed and happy workers. The potential of the vintage was already clear, even before the first fermentations were finished.

Lynch-Bages 2005 was aged in 80% new oak which is the most we have ever used, feeling it necessary to cloak the exceptional fruit and powerful tannins.