What ProWein 2016 has to Offer 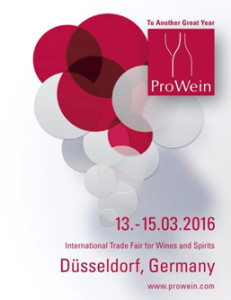 Some 6,000 exhibitors from 57 nations have announced their attendance at ProWein 2016 – all relevant wine regions of this world including 400 suppliers in the spirits department. This unique range will be complemented by a varied supporting programme with a whole host of tasting sessions and seminars.

More than 300 events are already offered by exhibitors directly at their stands. In focus here, for instance, are countries like Israel, Canada or New Zealand. Furthermore, special varieties like Japanese koshu wine, old archive wines or vintage ports will also be on show. New this year is the Organic Lounge hosted by the three associations Demeter, Bioland and ECOVIN. In addition to organic and bio-dynamic wine cultivation, here organic chef Karsten Bessai will be serving up suitable food offerings from his “organic kitchen”.

The programme is complemented by the central ProWein Forum in Hall 12: amongst the other things hosted here there will be a lecture given by the acclaimed winemaker Bruce Jack on the development of the South African wine business, a seminar by Prof. Li on how to do successful business in China and a masterclass on Bodega Numanthia, one of the best estates in the Toro winegrowing region. There will also be a focus on future developments: Wine Intelligence will be presenting the latest results of the ProWein Study on the topic of future trends in wine retail while the IWSR will give tips on how to reach younger target groups. Celebrity guests include handball star Stefan Kretzschmar and actor Andreas Hoppe alias Commissioner Mario Kopper from the German crime series Tatort. All dates are listed in ProWein’s event programme also featured at www.prowein.com

Unusual Ideas at “same but different”
The specials shows at ProWein are also definitely worth seeing: innovative projects revolving around wine production and marketing are at the focus of the “same but different” show, for instance. Initiated and organised by Messe Düsseldorf, the show is held twice a year and presents ten unusual projects from throughout the world.

For instance, one participant this year is the Flying Winemaker Eddie McDougall from Hong Kong. He not only produces wine himself in the heart of this megacity but he also hosts a well-known TV show and offers unusual events at his wine shop.
Another project is Thokozani from South Africa. Here first-class wines are combined with a good cause. Under the heading ‘black empowerment’ the aim is to give the black population access to education, experience and capital so that they can achieve economic independence long term. Thokozani is a project pursuing this aim initiated by the acclaimed Diemersfontein Winery. At San Vigilio, on the other hand, we look to fairy tales. Headquartered in Great Britain the company has, like Pinocchio, injected life into a piece of wood. Instead of a toy with a long nose here they have produced a classy barrique bottle for maturing wine and whisky. All participants at “same but different” will be individually presented from February on the ProWein Facebook page (www.facebook.com/ProWein.tradefair) and naturally also at www.prowein.de.

Other Topics in Focus
Alongside the “same but different” feature there are also other special shows: in the Champagne Lounge in Hall 12 tradition-rich Champagne houses will be showcasing the modern variety of their bubbly classics. The FIZZZ Lounge in the spirits segment is this year devoted to the topic of “Shim Cocktails” – complex, highly aromatic, perfectly balanced and, as alcoholic lightweights, the perfect compromise between old and familiar virgins cocktails and strong, high-percentage drinks. The central Tasting Zone in Hall 17 will be presenting the winning wines from MUNDUS VINI’s spring tasting while the “Packaging & Design” special show in Hall 13 will focus on products from the closure, labelling and packaging segments.

“ProWein goes City” celebrates its 10th Anniversary!
Once the trade fair closes all wine lovers not in the business in and around Düsseldorf will be catered for. The ProWein goes City programme will be celebrating its 10th anniversary this year attracting attention with many activities. Whether these are wine tasting menus, cookery courses, bottle parties or art exhibitions with a vintner’s winetasting – the spectrum ranges from a Hungarian wine evening and a culinary wine concert through to a tasting of exclusive wines from Château Pape Clément from Bordeaux. The full programme overview can be found online at www.prowein-goes-city.de.