ON-TRADE SALES SLUMP NOT RECOUPED THROUGH OTHER CHANNELS

Nearly a year after the first coronavirus lockdown, the 2020 wine sales figures for Austria’s domestic market are now available. The on-trade was particularly hard hit, as was to be expected. The hospitality industry’s purchases of Austrian wine through wholesalers dropped by a third. Austrian wine did see increases in consumption at home (+17% in volume, +18% in value) and purchases from multiple grocers (+16% in volume, +17% in value), where it also achieved a record share of revenue (75%). However, these increases were not enough to recoup the loss of sales from the on-trade.

WINE SALES AMONG ON-TRADE WHOLESALERS DOWN BY 33%

When the hospitality industry was forced to close its doors in mid-March last year, Austrian winegrowers saw their most important sales channel disappear for two whole months: looking back at 2019, hospitality and events accounted for 58% of all wine consumption in Austria. The second lockdown from 3 November 2020 onwards (with estimated end around Easter 2021) saw this situation of hardship extend to a third of the year. The figures for total wine sales released by the GastroData market research institute are now available to the Austrian Wine Marketing Board (AWMB) and appear to be strikingly in line with a lockdown of such proportions. From January to December 2020, the on-trade wholesale channel saw sales drop by 33% compared to the previous 12 months. “Austria’s innkeepers have tried, and are still trying, their very best to keep their businesses ticking over despite forced closure, for example by offering deliveries and take-aways. This means they are still able to sell a small amount of wine. Nonetheless, we still faced painful losses in on-trade wine sales last year,” AWMB CEO Chris Yorke reported. 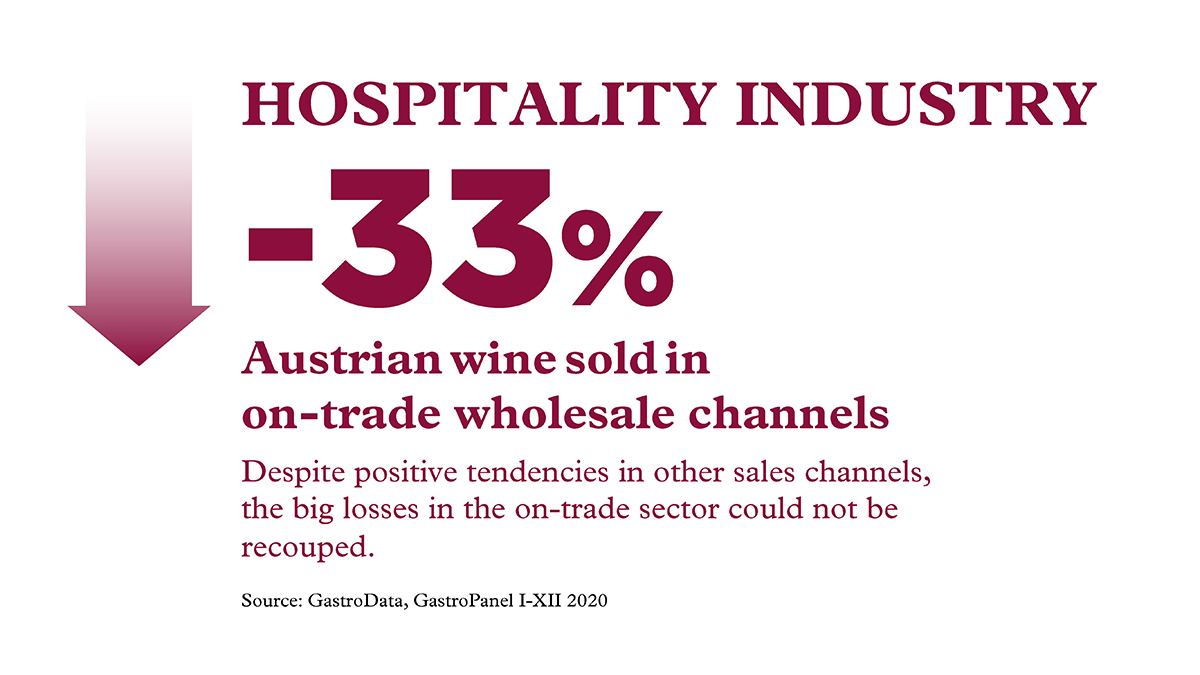 CONSUMPTION AT HOME: 1 IN EVERY 2 HOUSEHOLDS EXCLUSIVELY BOUGHT AUSTRIAN WINE

The three-month closure of the hospitality industry led to a significant increase in wine consumption at home. According to market research institute GfK, sales of Austrian wine for consumption at home rose by 17.3% in terms of volume and increased by 18.1% in terms of revenue. Particularly noteworthy is the fact that the proportion of households that exclusively bought Austrian wine grew to 47.3% – the highest rate since 1997. 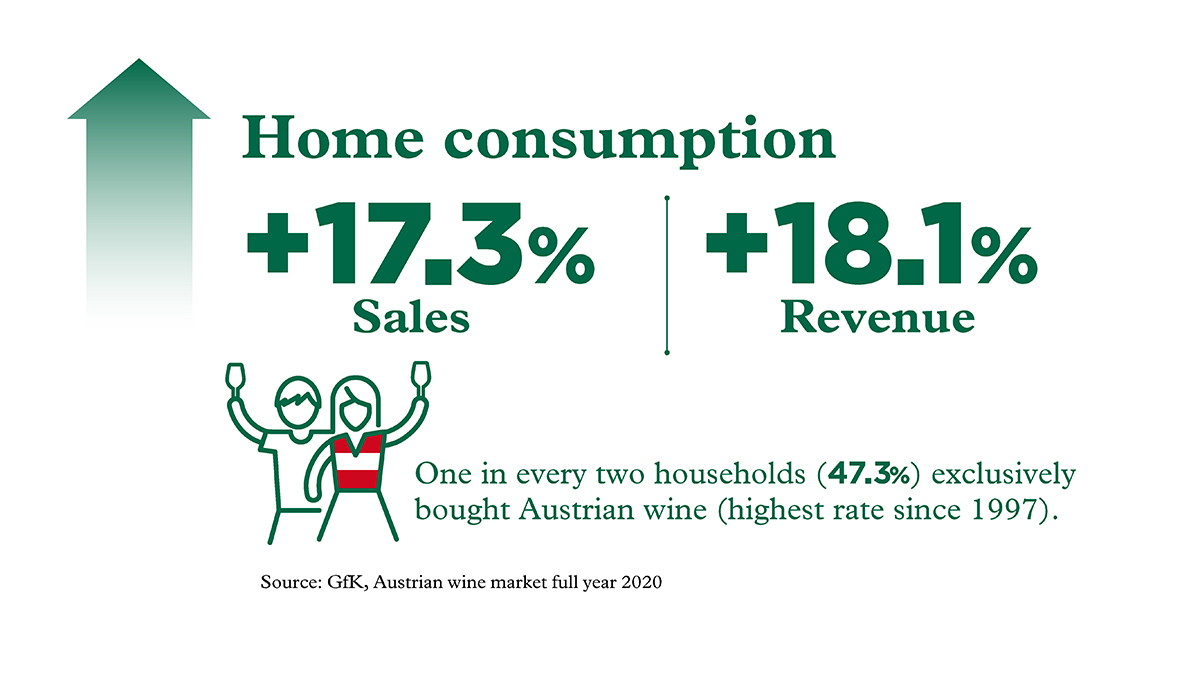 MULTIPLE GROCERS: FOR EVERY EURO SPENT ON WINE, 75 CENTS WENT ON AUSTRIAN WINES

Last year, multiple grocers benefited from a noticeable increase in sales. According to Nielsen IQ, 16.4% more Austrian wine was sold through this segment in 2020 – with this increase being equally distributed across red, white and rosé wines. In comparison, international wine sales only increased in volume by 3.9%. The higher sales of domestically produced wine were fortunately not linked to any reduction in the average price: revenue through this sales channel increased by 16.6%, with the average price per bottle going up slightly to €5.39 (compared to €5.38 in 2019). Austrian wine’s market share of total wine sales through the multiple grocer segment grew to an impressive 74.9% – the highest market share since 2000 (the earliest year of data available). 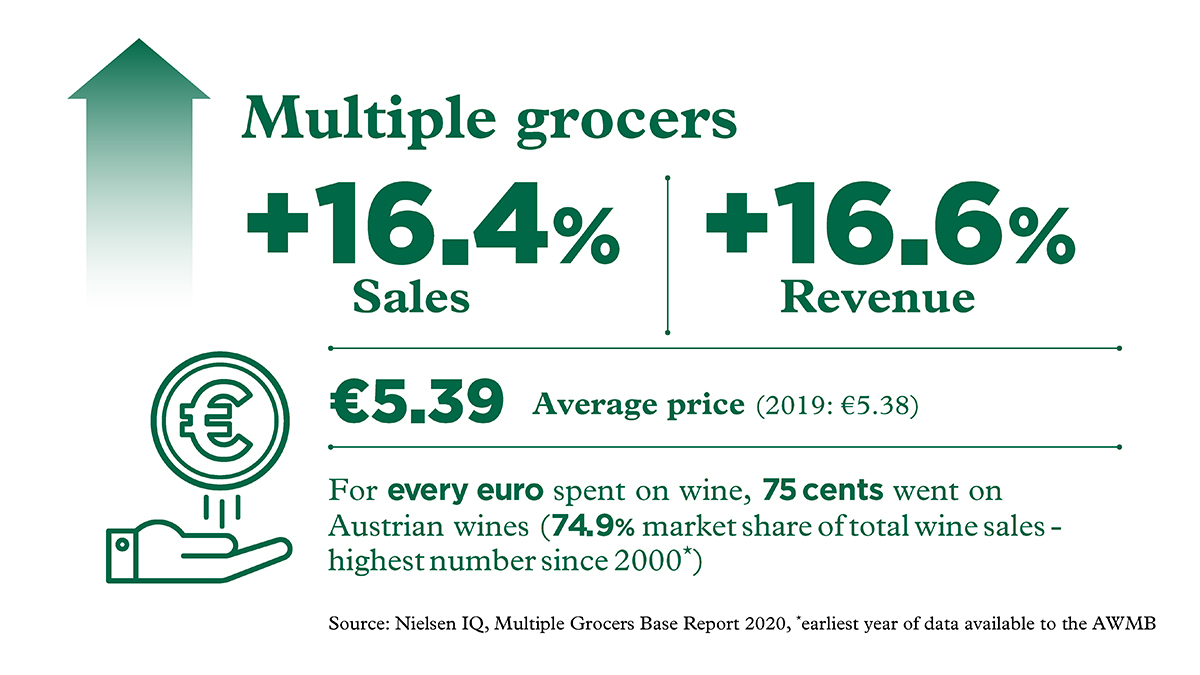 The closure of physical stores consequently led to a strong shift towards e-commerce retailers. According to GfK, the number of online purchasers increased between October 2019 and October 2020 by 48%, rising to around 124,000 people. On average, these consumers spent almost €60 per order.

TOURISM: HUGE LOSSES, WITH A FLICKER OF LIGHT IN THE SUMMER

For a long time now, tourists who purchase wine during their trips to Austria have constituted a sales channel that should not be underestimated. In 2019, tourists bought roughly 12 million litres of wine. The coronavirus pandemic was felt particularly strongly in this segment, with overnight accommodation numbers plummeting – especially in inner-city areas. “In some winegrowing regions, there was a real ‘summer of wine’ due to an influx of domestic holidaymakers. That being said, the latest figures still suggest that annual wine sales to tourists fell by almost half,” explained Yorke.

ALL IN ALL, ON-TRADE LOSSES NOT RECOUPED

Looking at the total figures for domestic sales in 2020, Yorke summarises the situation by saying: “Overall, we can see that the positive trends in some sales channels were not able to compensate for the huge slumps experienced through the on-trade and tourism.”

Austrian Wine ran a series of four campaigns one after another over the course of the year to provide the best possible support to Austria’s winegrowers in the domestic market. The first campaign was “Schmecke die Herkunft” (Taste the Origin), which supported sales throughout the first lockdown via the channels that were still open. The next, “G’spritzer”, promoted the Austrian white wine spritz when the hospitality industry was able to reopen in May. “Auf zum Wein” (All Aboard for Wine) promoted wine tourism from July to October, and then finally, to round off the year, the “Weine zum Fest” campaign promoted an end-of-year season centred around high-quality Austrian wines. In addition, in spite of the coronavirus situation and the unfavourable conditions, the SALON Austrian Wine competition was still able to take place, with the 270 award-winning SALON wines being promoted at numerous events throughout Austria.

Although 2020’s full-year export figures are not yet available from Statistics Austria, a slightly negative balance must currently be assumed: around 62 million litres (2019: 63.5 million litres) at €175 million (2019: €183 million). The AWMB will announce the full-year figures once they are published in March.