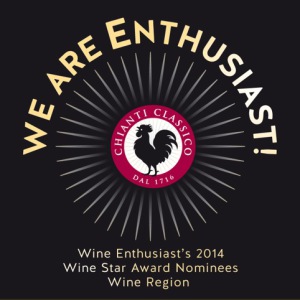 Just months after launch of Gran Selezione, Chianti Classico is in the running for the Wine Region of the Year award from Wine Enthusiast, America’s prestigious publication. The Black Rooster will be vying with high-caliber territories like Champagne, New York State, Red Mountain (Washington) and Sonoma Coast, California.

Tavarnelle, September, 2014 – Chianti Classico is once again being spotlighted by the international wine press: the latest news is its “nomination” by America’s famous Wine Enthusiast magazine for Best Wine Region of the Year 2014; four other prestigious contenders are Champagne, Sonoma Coast, Red Mountain and New York State.

As every year, Wine Enthusiast editors give awards in various categories to distinction in winemaking. The winners will be announced in the magazine’s special, late-December issue and receive their awards at a gala dinner in New York in January 2015.

For Chianti Classico vintners the reason for Wine Enthusiast’s choice is significant and gratifying: “Chianti Classico, Italy. Tuscany’s most famous denomination is undergoing a major renaissance. The quality revolution has resulted in top-shelf pours at incredible values, while investments into clonal research, vineyard management and marketing have created a new buzz in the region.”

“It is with great satisfaction that the Chianti Classico Wine Consortium learned of the nomination”, commented its president, Sergio Zingarelli. “Being selected as a symbol of dynamism and a model of enterprise in the worldwide wine sector is the right coronation for our work and a reward for the social cohesion, courageous decisions and intelligent shared undertakings of recent years, starting with Gran Selezione and revision of our quality certification system down to the restyling of our symbol, the Black Rooster”.

Chianti Classico continues to demonstrate its dynamism with a series of innovative projects that, among others, include the recent inauguration of a Black Rooster wine bar and shop on the first floor of the Mercato Centrale in Florence and of a multipurpose center in Radda in Chianti, the Chianti Classico House, the Black Rooster’s new outpost that hosts wine education courses for experts and beginners, a single-brand wine shop and various events for wine-lovers.

“Italy’s most famous denomination” as Wine Enthusiast defines it, can boast of big figures in the country’s wine panorama. The Chianti Classico Wine Consortium has 560 members, 365 of them bottlers. And Chianti Classico, which in the wine world can rightly be called a district, can in fact count on “big business” numbers: estimated sales of more than 600 million euros, bottled wine value of 360 million and olive and oil production worth 10 million euros.