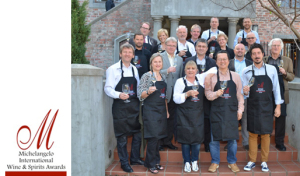 “It’s been an absolutely magnificent year for Michelangelo,” says Lorraine Immelman, founder and owner of the Michelangelo International Wine & Spirits Awards. Not only have we had an all-time record number of entries – 1730 in total from 322 producers – but 2014 has also been a year of “firsts”!

Collotype Labels has come on board as premier sponsor of the awards, ensuring that the competition will continue and grow. A new, more elegant logo and user-friendly website was launched this week and an exciting Michelangelo Wine Club, run and managed by IQ Business, has been established in Johannesburg.

Now in it’s 18th year, the Michelangelo announced South Africa’s first Liqueur Awards in June, offering producers of liqueur and fruit spirits a first-ever platform to have their products judged by an international panel of specialist judges.

The Michelangelo is the only wine competition in South Africa with an exclusive international panel of accredited wine judges, international wine makers, wine masters and international sommeliers. This year again 18 wine and spirits specialists from 15 countries judged the entries for a week in August.

In total the judges awarded 607 medals, which represent just over a third of entries (as per the international OIV rules to which the Michelangelo ascribes). Awards comprised:

This included the inaugural Liqueur Trophy as well as three Grans d’Or, five gold and seven silver medals for liqueurs.

“This year’s 22% increase in entries is an indication of the wine industry’s dramatic move to international markets over the past decade. As the world becomes smaller and the South African market becomes more and more saturated, producers are investigating more exports or their products. Michelangelo offers them the opportunity to gauge the international market and find those products which will appeal to international palates. The awards made by our international panel of judges offers these guidelines,” says Lorraine.

Kleine Zalze walked away with two trophies this year:

All entries were judged blind using the 100-point OIV judging system. The judging process and all results were audited by DDI Financial Solutions.

This year the judging panel consisted of 18 judges from fifteen different countries. The 2014 judges were:

The brandy and spirits judges: