Austria’s domestic wine industry has been working hard for several years to improve the profile of its quality sparkling wines. A first step was to establish the Austrian Sparkling Wine Committee – analogous to Austria’s Regional Wine Committees – in 2013. And now, a three-tier quality pyramid for sparkling wine from Austria has been developed in close cooperation with the Austrian Wine Marketing Board (AWMB). The pyramid was introduced on October 22nd – the Austrian Sparkling Wine Day. 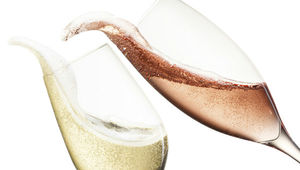 “In winemaking, Austria is already amongst the world’s best,” states Willi Klinger, managing director of the AWMB. “And now, our goal with the new quality pyramid is to bring the public closer to the origin, diversity and excellent quality of Austrian sparkling wine – and with that, awaken the same patriotism that is already so strongly shown for our quality still wines!”
“This quality pyramid represents the beginning of a new era for Austrian sparkling wine,” says the chairman of the Austrian Sparkling Wine Committee, Herbert Jagersberger. “The Austrian Sparkling Wine Committee is proud to launch this important step for quality and marketing through the involvement of all sparkling wine producers in the country.” The basis category (Level 1) of the pyramid features stricter minimum requirements for Austrian quality sparkling wine. It guarantees mainly the Austrian origin of the grapes and base wines as well as the sparkling wine’s minimum maturation period of nine months on the lees. At the second level, sparkling wines must be produced according to the traditional method, namely, bottle fermentation. The grapes and base wines must come from a generic wine growing region (federal state) and the maturation period on the lees must be for at least 18 months. At the highest category of bottle-fermented sparkling wine, the grapes may be picked only from a single wine community (such as Poysdorf, Langenlois, Gols and Gamlitz), whereby vineyard site designations are possible. After bottle fermentation, the sparkling wine in this category may be released on the market at a minimum of three years following the harvest including maturation on lees for at least 30 months. 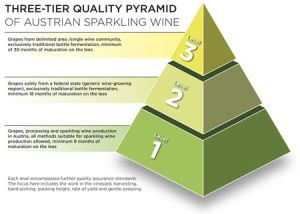 Incorporation into the wine law in 2015

Each level encompasses further quality assurance standards. The focus here includes the work in the vineyard, harvesting, hand picking, packing height, rate of yield and gentle pressing. Criteria for the sparkling base wines and for the checking and control of the quality levels are being developed and defined in detail over the coming months. These will be accompanied by a marketing strategy – designed together with the AWMB – that will effectively communicate these new categories. The precondition for the effectiveness of this strategy is the incorporation of this strict, quality-oriented body of regulations into the Wine Law, which is planned for 2015.

“Austrian Sparkling Wine” on the label: a guarantee of Austrian quality

According to a study by A.T. Kearney, the regionality of products is becoming increasingly important. The survey confirmed that, for customers, regional origin as a buying decision criterion is even more important than the organic food qualification.
This development also underscores the current figures: not only has the total volume of sparkling wine since 2008 – the year before the “Day of Austrian Sparkling Wine” initiative began – increased by about 30 percent compared to the year 2013 (source : AC Nielsen), but also the share of Austrian sparkling wine rose to well over 30 percent. In other words, of every three bottles of sparkling wine consumed in Austria, at least one of them is produced in Austria. This means that the harvest total of Austrian sparkling wine makes up about 10% of the domestic wine production.

To make sure that a domestic premium product is poured, the sparkling wine producers recommend a careful examination of the label on the bottle: the designation “Sparkling Wine Made in Austria” (Sekt hergestellt in Österreich) is not synonymous with “Austrian Sparkling Wine” (Österreichischer Sekt). Only when 100 percent of the wine comes from Austria and the production of the wine takes place in Austria, then the product can bear the label “Austrian Sparkling Wine”.