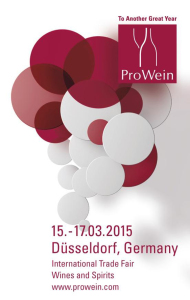 Outlook for 2015: Stable Global Demand with Advantages for Wines from Cool Climates

Wine consumption in traditional producer countries may be dropping but wine is becoming ever more popular especially in Asia and North America. While the trend towards sustainable wine cultivation and wines from cool climates is continuing, winegrowers in many countries are experimenting with sulphur-free “natural wines” and wines from clay amphorae. The 2014 harvest is able to meet global consumption and cover base/processing wine requirements.

The good news for all protagonists in the international wine trade meeting held in Düsseldorf once again from 15 to 17 March 2015 at ProWein, the leading international trade fair for wines and spirits, is that international exchange is gaining ever more importance in the wine sector. Since 2005 the global volume of imported and exported wine has risen from 72 m hectolitres (hl) to last year’s 99 m hl. This figure accounts for 40% of global wine consumption which has remained relatively stable with minor fluctuations at some 240 m hl. However, as the international wine organisation OIV noted in its latest market report, there are significant shifts within wine consuming countries. While in France, China, Italy, Australia and Austria consumption fell, it rose in the USA, Germany and Greece.

Posting 29 m hl in 2013, the USA became the largest consumer market in the world for the first time, mainly because the heavy drop in consumption in France (28 m hl) has continued. Following in third and fourth positions are Italy also with a drop in consumption (22 m hl) and Germany (20 m hl) with a slight rise in consumption. China (17 m hl) ranks fifth although its rapid growth of previous years may have been halted due to the government campaign against corruption. Nevertheless, Euromonitor predicts that by 2017 China could already become the world’s largest wine market.

While in France, Italy and China it is primarily domestic wines that are drunk, the TOP 3 consumer countries are at the same time two of the three most important wine importing nations in the world. As in previous years, the largest wine importers, and therefore also the most important consumer countries participating in the global wine trade, were Germany (15 m hl) ahead of Great Britain (13 m hl) and the USA (11 m hl). Many producers see considerable growth potential in the USA as the relatively low per capita consumption continues to rise.

Still in Focus: Sustainability and Wines from Cool Climates

Regardless of these shifts in the quantities consumed and traded, some trends still apply in international wine cultivation across all countries. For a long time now ecologically aware, sustainable wine cultivation has no longer been just a niche market. National wine associations – from countries/regions like South Africa, California, Chile or New Zealand – have further developed their sustainability schemes. Spain, Italy and France already cultivate almost 200,000 hectares of vineyards ecologically. And at ProWein 2015 organic wines are returning to their regular segmentation by nation at the request of most exhibitors.

While in Europe importance is attached to quite strict, internationally defined organic production regulations, New World countries tend towards a more comprehensive concept that not only includes wine cultivation itself but also the social responsibility aspects like treatment of staff and fair trade. For the world’s largest biodynamic producer, Chile’s Emiliana winery, shifting to this approach was also a quality decision as the recently untimely deceased CEO José Guilisasti always used to stress: “We believe that sustainable and biodynamic production is a prerequisite for vineyards in natural balance and this translates into better grape quality and better wines.”

A small but growing number of producers throughout the world go one step further seeking the original taste of natural wines as opposed to industrial methods in wine cultivation and production. Some producers are experimenting here with must fermentation with white wines, fermentation and storage in clay amphorae and a move away from sulphurisation.

While these methods are used fairly rarely, the international trend towards cool cultivated, fresh and lower alcohol content wines continues unabated. Primarily as a result of the fear of climate change this is prompting many countries to develop new vineyards at higher altitudes. Spanish winegrowing pioneer Miguel Torres has set up vineyards at the foot of the Pyrenees at an altitude of 1200 m. “It is a sort of climate insurance,” he says.

At 271 m hl global wine production in 2014 stood slightly below the previous year’s figures. Here, too, major shifts have occurred in the large producer nations (the following harvest figures are based on OIV estimates). The date when the new vintage makes its international debut does, however, remain the same: at the leading international trade fair ProWein in Düsseldorf over 5,000 exhibitors from 50 nations present their wines and spirits to the trade audience.

With 20.4 m hl Italy (located at ProWein in Halls 15 and 16) is the world’s largest wine exporter but due to a low harvest in 2014 (44 m hl) it cannot maintain its position as the largest wine producer. Market observers anticipate rising prices that will primarily impact its largest customer Germany. Alexander Hofer from Gruppo Italiano Vini sees China and Russia as the most important growth markets for Italian wines.

46 m hl of wine make France (whose exhibitors are showcased at ProWein 2015 in Halls 11 and 12) the world’s largest wine producer in 2014 but the country faces a drop in its exports to China. A “2025 Action Plan” aims to achieve further improvements in production, human resources and marketing and to focus more on topical social responsibility and sustainability themes.

Of all the wine producing countries Spain (Hall 10) boasts the largest area under vine (1.08 m ha) but with some 37 m hl it harvested considerably less than in the previous year. Thanks to an intense export push producers are able to counter the decline in domestic consumption noticeable for many years now. Two thirds of Spain’s exports are barrel wines. The trend towards increased organic cultivation and autochthonous grape varieties like Garnacha or Monastrell continues.

With its 9.3 m hectolitres Germany (at ProWein in Halls 13 and 14) has once again posted a normal wine harvest among the smaller producer countries. In terms of exports Germany has achieved rising average prices for several years now. The trend towards high-quality wines from precisely defined terroirs continues. Sales of Greek wines are benefitting from a considerable revival of Greek tourism. Portugal is not able to reach last year’s export volume because the exceptional barrel wine deliveries to Spain and France are not likely to be repeated.

On a general level, New World production and consumer countries continue to gain importance. Last year Chile overtook Australia as the fourth-largest wine exporter in the world. The exports of the Andean nation rose to almost 8 m hl. Harvesting some 15 m hl in 2014 (excluding juice and must) Argentina continues to suffer from bureaucratic regulations. However, the rapid spread of high-quality single varietal wines cannot be overlooked. Malbec from Argentina has long since become an indispensable part of the range on the US and Canadian markets. South Africa (harvest volume 11.4 m hl incl. juice, concentrates etc.) continues to be very successful on the export front. Siobhan Thompson, CEO of the export organisation WOSA, would like to set new focuses in the future: “We export over two-thirds of our foreign sales to the saturated markets of Europe. In future we have to look more towards the US and the Far East.” Despite its drop in area under vine Australia, with 12.6 m hl, harvested slightly more than in the previous year and plans to present a 5-year plan to improve its international market position. New Zealand posted a record harvest of 3.2 m hl (+29%) allowing the country to meet increasing demand. The New Zealand wine industry – that attaches particularly great importance to sustainable production – wishes to increase its export volume over the coming years by 50% to 2 billion NZ dollars.

Although international wine production in 2014 does not quite reach that of the previous year, the available quantity does stand far above worldwide consumption, which means sufficient base wine is available. Overall, the 2014 vintage will be able to cover global demand in the coming year, as OIV Managing Director Jean-Marie Aurand noted on presentation of the harvest figures. These are the best prerequisites for the top class meeting of the international wine and spirits sector: ProWein in Düsseldorf, from 15 to 17 March 2015.

The author Jürgen Mathäß has been working as a journalist for over 20 years. After working as editor-in-chief at the German wine business journal “Weinwirtschaft” (1986-1992) he now concentrates on his work as a freelance journalist and wine consultant.