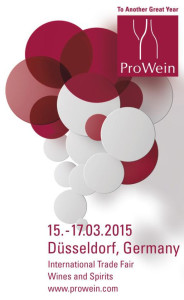 At the next edition of ProWein Messe Düsseldorf will be creating a new
special show. Under the heading “same but different” Hall 16 will be host to
innovative ideas for wine production and marketing. A total of some 5,500
exhibitors from 50 countries will be presented at ProWein 2015 in Düsseldorf
from 15 to 17 March.

Some ten participants will feature at the first edition of the “same but
different” special show – including projects from Germany, France, the
Netherlands and Curacao, Spain and South Africa. What these participants
have in common is that while they produce and/or sell wine like other
ProWein exhibitors, the organisers believe they offer “something different”
in the best sense of the word – be this in wine production or marketing.
With “same but different” ProWein organisers not only wish to offer a
platform for innovative ideas and approaches but also stimulate inspiration
and creative exchange of ideas within the sector.

The way participating winemakers and projects explore new avenues does vary
– no two concepts are the same. This line-up, for instance, includes Lukas
Krauß, a young winemaker from the Pfalz region, who in tune with his
trademark headgear divides his wines into “hat categories” and who has hit
the headlines with his “Pornfelder” wine (a cuvée of Portuguese and
Dornfelder). Michael Spreckelmeyer is also familiar with headlines –
especially with heavy metal bands and other musicians. Under the heading
“Metal and Wine” this Düsseldorf local markets the wine of rock stars. He
brings bands and winemakers together, gives advice and takes care of sales
and merchandising.

Taking new paths in the truest sense of the word are Ilse and Roelof
Visscher who not only cultivate wine around their winery in the Netherlands
but now also in the Caribbean: using crowd funding they are financing their
new wine cultivation project on the island of Curacao. Travelling to ProWein
2015, not from the Caribbean but from South Africa, are representatives from
uniWines. Their “Palesa” line of wines are Fairtrade products inspired by
the passion and strength of African women and mothers. The proceeds from
Palesa are used to fund corresponding social projects in the region.

All “same but different” participants will be individually presented from
February on the ProWein Facebook page (www.facebook.com/ProWein.tradefair)
and obviously also at www.prowein.de. Hosted presentations of the individual
projects and personalities will run at repeated times on each day of the
fair.

In addition to “same but different” ProWein 2015 has other special shows in
store. At the Champagne Lounge in Hall 12 tradition-rich Champagne houses
will be presenting the modern variety of this sparkling classic. The motto
of the FIZZZ Lounge in the spirit segment, also in Hall 12, is “Drinks of
Tomorrow” while the Central Tasting Zone is dedicated to the winning wines
of MUNDUS VINI’s spring tasting (Hall 17). At “Packaging & Design” in Hall
13 some 20 companies from the bottle closure, labelling and packaging
segments will be showcasing their products.

Familiar Unique Line-Up of Exhibitors in New Halls However, the focus in the
halls of Düsseldorf exhibition centre are obviously the some 5,500
exhibitors from throughout the world. The largest participations once again
come from Italy (approx. 1,350), France (approx. 1,250) and Germany (approx.
950). Also posting particularly strong growth are Australia, Spain and the
USA. After two years’ break, this year several Indian producers will be
presented again while eight wine estates from Bolivia will be celebrating
their premiere at ProWein.

With the shift of ProWein from Halls 1 to 7.1 into Halls 9 to 17 it is
important to realise that no exhibitor will be in the same location as last
year. However, ProWein retains its inner logic – segmentation according to
nation and region – which makes it possible to also retain the intuitive
visitor orientation at ProWein as in previous years. Furthermore, trade fair
management also urges all visitors to use the comprehensive online range at
www.prowein.com for the individual planning of their visits. The extensive
exhibitor database has already been live since mid-October and is updated on
a daily basis. Thanks to the database’s MyOrganizer function everyone can
familiarise themselves with the new hall layout and newcomers and plan their
very own route through the trade fair using the interactive hall plans. The
Matchmaking Tool also makes it possible to make contacts with potential new
partners and arrange appointments even ahead of the fair. Last but not
least, the Online Ticket Shop in the “Visitor Service” area offers reduced
price admission tickets to the fair.