From March 15th to March 17th, 2015, Düsseldorf, Germany, will once again become the center of the wine world with the holding of the renowned ProWein trade fair there. In attendance will be 350 Austrian winemakers, wine traders and partner firms, all presenting – in cooperation with the Austrian Wine Marketing Board (AWMB) – at the general stand of the Wirtschaftskammer Österreich (Austrian Economic Chambers). Because of the fair’s outstanding success to date, the ProWein management had decided on relocating to another part of the exhibition area in 2015. With this, Austria secured its own hall – Hall 17 – which will finally offer more exhibition space and presentation possibilities. 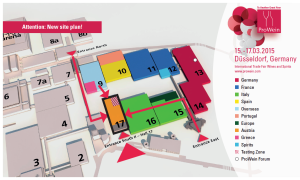 The significance of ProWein has been growing far beyond Europe’s borders for several years already. This is why the participation of Austrian winemakers has increased year by year, with 2015 seeing 350 exhibitors – the highest number ever – taking part at ProWein’s Austrian stand.
“We see the move into the new hall as a very positive thing,” says Katharina Papst, AWMB regional manager for the German speaking export countries. “Good products need an appropriate setting, and the new hall will provide this. Especially the height of the hall will add to a better tasting atmosphere.”
The new hall can be reached directly through Entrance South II, or from the Entrance North – Hall 9 (as well as through the “passage”), or through Entrance East – Halls 15 and 16. The Meininger tasting zone, also located in Hall 17, will be another public attraction in the hall.

The new stand design for the Austria hall was created by Trecolore Architects, with Klaus Baumgartner, who were chosen for the project through an architectural competition. The new design, even with its puristic expression, underscores an aura of traditional Austria – cosiness and a pleasant atmosphere – through the use of natural light wood.
While the spaciously arranged presentation areas at the front part of the display stands represent openness, the meeting areas behind them offer the necessary privacy and discretion for consultations.
“The most important part of the new design is the emphasis on Austrian wine origins,” explains Willi Klinger, general manager of AWMB. “Through a colour coding system, all wine regions are assigned to their corresponding parent federal states and are sensibly integrated.”
Regional associations are positioned in close proximity to their corresponding regions, and national brand and sales communities are generously integrated amongst the outer stands.

Again, AWMB is Amidst the Winemakers

The AWMB and its information stand will be amidst the exhibitors in Hall 17. The wide range of services includes exciting daily theme tastings, an expansive range of information materials, a compact exhibitor list and, of course, the opportunity for individual discussions with AWMB executive and regional managers.