Austria’s 2014 Vintage – Worth The Struggle 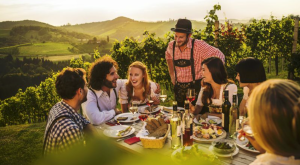 The difficult weather conditions during the Summer and Autumn of 2014 were no secret. And they certainly left Austrian winemakers with their hands full as they did everything they could to pick healthy, ripe grapes in the vineyards. Ultimately, after loads of extra effort and much added expense, pleasurable, lean wines were finally achieved – but only through a small harvest, which, at approximately two million hectoliters, is again well below the long-term average.

After a very mild Winter and a dry, beautiful beginning of Spring, an exceedingly cool, wet month of May served as a first warning. There was favourable weather during the flowering period, however, after a brief heat wave, the wet conditions returned and lasted more or less throughout the entire Summer.  August in particular was extremely cloudy and lacking in sunshine, although there were still some signs of a good vintage ahead. The final confirmation of a difficult vintage, however, was a very wet September. Only in October did the tide turn just a bit for the better.

The nasty conditions weren’t in short supply in Austria’s largest wine region, Niederösterreich (Lower Austria), where even occasional hailstorms occurred. Nevertheless, through the meticulous selection of grapes, the ever-reliable Grüner Veltliner delivered wines with plenty of fruitiness, lean- to medium body and a fresh, but never aggressive, acidity structure; higher must weights were possible only sporadically. Also for Riesling, a prolongation of the harvest’s beginning was rewarded with pleasant, ripe wines that exude components of exotic fruit à la pineapple and mango.
Although acidity levels are clearly higher than usual, they are well integrated into the wines.   Chardonnay and Weissburgunder (Pinot Blanc) are round in structure, while the aromatic varieties like Muskateller and Traminer reflect the extensive difficulties they had to face because of the rough weather conditions. In the red sector, expected are wines balanced with light fruitiness and leanness that most likely will prompt early drinking pleasure.

The circumstances in Burgenland were similar to those in the rest of Austria, with the hot temperatures during the flowering period resulting in some couloure and, ultimately, distinct crop losses. Due to the lower sugar content in the grapes the 2014 vintage will not yield as many top selection wines or single vineyard reserve wines as usual.  For many early-ripening white varieties as well as for the sensitive red Zweigelt, urgent action was necessary in order to gather a reasonable amount of healthy grapes. The red variety at an advantage was robust and thick-skinned Blaufränkisch, according to winemakers from the Mittelburgenland and Südburgenland regions. While French varieties had a difficult time, Merlot seems to have better chances. St. Laurent and Zweigelt are accessible and inviting with supple fruit, elegant structure and moderate alcohol; Blaufränkisch this year is showing more dark fruit notes than usual. Principally, Burgenland red wines that are lean, yet accessible and inviting with red berry notes, can be expected.
It is still too early for a sweet wine prognosis, but so far these are revealing elegant structure, concise acidity and a filigree expression – very fresh and youthful with an excellent ageing potential. For the dry white wines, once again, the relatively small harvest is underscored. Early ripening varieties such as Bouvier, Muskat Ottonel and Sauvignon Blanc are clearly fruit toned, while the later varieties like Grüner Veltliner, Chardonnay and Weissburgunder are marked by freshness and vibrance with nuances of exotic fruits.

In Steiermark (Styria), conditions were no less difficult, especially with the heavy rains during September affecting each grape variety differently. A hailstorm at the beginning of September in Vulkanland Steiermark (Südoststeiermark) did not make the situation any easier. Considering such circumstances, it is gratifying that Styrian white wines that have been tasted so far are appearing very animated and vibrant, although with somewhat less alcohol than usual. This “shortcoming”, however, is compensated by lovely balance and approachability and especially by deep fruitiness that accentuates the best of the varietal attributes. Welschrieslings are appearing very crisp and refreshing, while the Muskatellers are somewhat reserved.  From the most important grape varieties, Sauvignon Blanc is showing excellent typicity – good depth and fruitiness with the gritty accents standing out a bit.  Weißburgunder and Morillon (Chardonnay) seem rather supple and balanced – as do the Schilcher wines of Weststeiermark, although they are once again somewhat lighter after three previous strong vintages.

In Wien (Vienna), the complicated vintage began with a heavy hailstorm at the beginning of May, causing considerable damage and drastic crop loss especially in the renowned Nussberg vineyards. Fortunately, other vineyard sites in Döbling and Mauer as well as on the Bisamberg were spared. After this Spring shock, the weather was generally similar to that in the other regions, though ripeness was a notch up here and there. Weißburgunders and Chardonnays are looking round, creamy and well-developed, while some Rieslings have a bit of a Botrytis influence counterbalanced by racy acidity. Vienna’s showcase wine, Wiener Gemischter Satz, seems to shine with plenty of balance and complexity, and with origin characteristics coming to the fore. In Vienna’s red wine segment, a red berry expression that surpasses what was delivered in the 2010 vintage can be expected.