ProWein 2015: Success across the Board 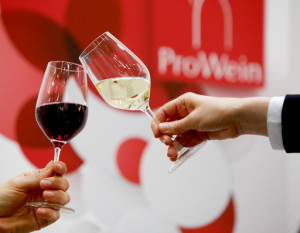 The results of the 22nd ProWein are certainly positive: More than 52,000 international trade visitors, 47% international professionals, came to the nine exhibition halls from 15 to 17 March 2015 to form an overview of the range from 5,970 exhibitors from 50 countries and place their orders for the current year. While the professionals remained amongst themselves in the exhibition halls, the “ProWein goes City” initiative once again proved a highlight in the city.  The programme of events provided gourmets and wine fans with a wide range of first-class events to choose from.

Düsseldorf once again impressively underlined its reputation as a metropolis for the wine and spirits business: after three days of activity ProWein 2015 came to a very successful close on Tuesday, 17 March. 5,970 exhibitors from 50 nations featured in Düsseldorf. All major wine nations and cultivating regions were present in the nine exhibition halls – the “classics” from Europe and the New World as well as the more “exotic” on the international scene (like Bolivia and Armenia). No less varied was the line-up from the 420 spirits exhibitors from 30 countries. This spanned classy brandies and liqueurs through to national specialities and international classics.

This product spectrum attracted more than 52,000 trade visitors, including more than 24,000 international visitors to Düsseldorf – a rise of 7% over the previous year (2014: 49,048 visitors). This is largely due to the increased number of trade visitors from the USA/Canada as well as Central and South America. Echoing the views of many here Craig Wolf, President and CEO at Wine & Spirits Wholesalers of America said: “I have to say I was quite impressed with the size, scope and the tremendous variety of quality products on offer at ProWein from all over the world – all in a modern, easily navigable facility. ProWein has done an amazing job building and growing one of the premier industry trade shows, creating a multitude of opportunities for buyers and sellers alike.“

The great ordering activity at ProWein is also very pleasing: 40% of trade visitors already placed orders right at the fair itself and some 44% plan to order after the fair.

“The international appeal of ProWein and its relevance as an order platform for the retail, restaurant and hotel trade is probably unique. Our visitors come from 123 countries – again this is 13 more countries than last year,” said Hans Werner Reinhard, Managing Director at Messe Düsseldorf, underlining the success of ProWein 2015. “The great ordering activity at the fair itself is also of outstanding relevance, as is post-fair activity. To put it in a nutshell: ProWein is undisputedly the world’s most important trade fair for wines and spirits.”

As in the past – the main interest of ProWein trade visitors is focused on wines from Germany, Italy, France, Spain and Austria. Also striking is the professionals’ increasing interest in Champagne (20%), and sparkling wines (19%) as well as spirits (21%). Demand for German wines compared with last year has also risen again by 9% to 59%. And the verdict from the German Wine Institute was therefore also positive. “From the point of view of German exhibitors, the new hall concept at ProWein went down well with trade visitors. The shift into the new exhibition halls has made it possible to present about 120 more operations from German winegrowing regions (totalling 960 German exhibitors) to the international trade audience,” says Monika Reule, Managing Director of the German Wine Institute (Deutsches Weininstitut – DWI) summing up. “The eagerly awaited 2014 vintage went down very well with trade visitors. It has produced very fruity and pleasantly sleek white wines that captivate with their fresh buzz. The slightly larger harvest over last year suits the current market climate very well. This means we can better meet the continuing good demand both at home and abroad also once again demonstrated at this year’s ProWein.”

Austria – with just under 5,000 m2 the fifth largest nation at ProWein 2015 – also drew positive conclusions. “ProWein is the most important wine fair in Europe and the world. This is also relevant not least for the Austrian wine business,” underlines Wilhelm Klinger, Managing Director of Austria’s wine marketing board Österreich Wein Marketing. “In view of the new hall constellation with the necessary move from Hall 7 into Hall 17 we have gone into the offensive and have developed an entirely new concept in terms of design, visitor guidance and catering. And I can say the concept has paid off. Our winemakers have made many good contacts from our main export markets Germany, the USA and the Benelux – and have also held many promising discussions with trade buyers from China and Eastern Europe.

Once again a firm fixture at ProWein this year was the supporting programme featuring more than 300 tasting sessions, lectures and presentations hosted either at the stands of exhibitors themselves or at the central ProWein Forum. The numerous tasting zones on the most varied themes – such as that of SOPEXA with its 100 selected French wines, the Champagne Lounge or of the MUNDUS VINI competition, offered visitors an outstanding opportunity for independent tasting. For spirits professionals the FIZZZ Lounge – under this year’s motto “Drinks of Tomorrow” – was another highlight. The “same but different” special show was able to claim a successful premiere. Ten international exhibitors impressively showcased their unusual projects in production and sales.

ProWein goes City: Wine and Gourmet Flair in the City and Region

ProWein did not stop at the gates of the exhibition centre this year either. This was primarily due to the “ProWein goes City” initiative with its over 80 events generating a real buzz amongst wine lovers and gourmets across the city and the region. Providing additional highlights here were numerous evening events – such as Saturday’s wine evening with Chateau Palmer at Steigenberger Parkhotel or the Big Bottle Party organised by the magazine falstaff at Tafelsilber.