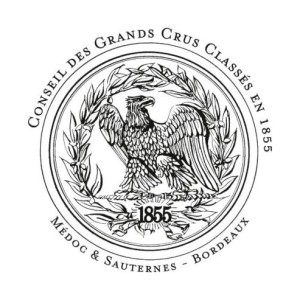 Sunday, June 14, 2015
For over 30 years, the Conseil des Grands Crus Classés en 1855 (Médoc & Sauternes) has hosted a dinner at one of the Premier Grand Cru Classés honoring the International Press on the opening night of the world’s premier wine and spirits exhibition, VINEXPO Bordeaux. This year, the tradition continued as 480 people gathered at Château Margaux on Sunday, June 14, 2015. 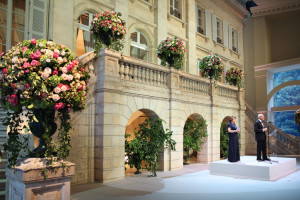 Almost 275 journalists from 37 countries were welcomed by Madame Corinne Mentzelopoulos and by Philippe Castéja, Président of the CONSEIL DES GRANDS CRUS CLASSÉS EN 1855 (Médoc & Sauternes). Following a tasting of Sauternes & Barsac Grand Cru Classé wines from 2005 to 2010, Médoc Grand Cru Classé wines from the 2005 vintage were served. Then vintages from 1996 to 1986 were served with the main course, followed by Château Margaux 1985. To conclude this superb dinner created by three-star chef Guy Savoy, the guests enjoyed Château d’Yquem 1988.

The guests inaugurated the new cellars at Château Margaux, designed by the world-renowned architect Lord Norman Foster, on the bicentennial of the estate’s buildings celebrating two centuries of architecture in the service of a great wine.

This year marks the 160th anniversary of the 1855 Bordeaux Classification, which was celebrated on April 21st at the Ministry of Foreign Affairs in the presence of Minister Laurent Fabius and Secretary of Foreign Trade Matthias Fekl who noted the importance of the 1855 Great Classed Growths for France’s global reputation. Philippe Castéja also remarked in his speech at the Quai d’Orsay that “160 years later, here at the heart of the French state—which we must remember was integral to the classification’s origins—it is appropriate that we celebrate these 88 Médoc and Sauternes estates and underscore the vitality of this unique classification.”

It is the intention of the CONSEIL DES GRANDS CRUS CLASSÉS EN 1855 and its members to be vital actors in the expansion of French culture and ideals. Their wines are sold in over 170 countries across the world, incontestably conveying a positive image of the art of living, conviviality and savoir-faire. This is the reason why the 1855 Great Classed Growths have supported numerous undertakings, such as France’s candidature to host the Universal Exposition of 2025. Indeed, does not the 1855 Classification offer living proof of a universal exposition’s value for a nation?
Finally, the CONSEIL DES GRANDS CRUS CLASSÉS EN 1855 has made official its intention to register the “1855 Classification of Bordeaux Wines” as an intangible element of French cultural heritage in advance of its request for inclusion on the UNESCO intangible cultural heritage register. In view of this, a major multidisciplinary international colloquium on the current state of the 1855 Classification will be held in Bordeaux in June 2016, with the publication of its proceedings to follow.
The CONSEIL DES GRANDS CRUS CLASSÉS EN 1855 (Médoc & Sauternes) is the official organization dedicated to the advancement and presentation of wines listed in the 1855 Bordeaux Classification. It manages all aspects of promotional, technical, economic, and legal questions relating to the 1855 Grands Crus Classés (Médoc & Sauternes), the administration of their affairs and the enhancement of their prestige. The 1855 Classification was established at the request of the French Emperor, Napoléon III, who wished for the finest products of the Empire to be presented at the Universal Exposition at Paris in 1855 (the first universal exposition organized in France).