Vinexpo, partner of the Best Sommelier of Asia Oceania competition

Bordeaux, 9 November 2015  – Vinexpo is THE event and partner of the wine and spirits industry of which the on-trade is an important business sector. Sommeliers count amongst the key actors of the trade and are essential ambassadors for wine and spirits culture. In recognition of the crucial role of sommeliers Vinexpo has reinforced its historical link to ASI (Association de la Sommellerie Internationale).

The competition took place in Hong Kong on Friday 6 of November 2015 and was won by Hiroshi Ishida (Japan) ahead of two other finalists Ho Pong Wallace Lo (China) and Banjo Harris-Plane (Australia). All in all 17 competitors from 10 different countries of the Asia-Pacific region have participated in the competition. Hiroshi Ishida (46) works as a consultant sommelier. He will be representing Japan at the Best Sommelier of the World competition in Mendoza Argentina in spring 2016. Vinexpo will also be the partner of this “Sommelier Worldcup”. 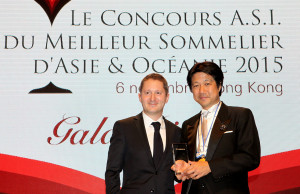 Vinexpo partner of the wine and spirits trade
Vinexpo’s commitment to ASI and the sommelier profession goes far beyond teaming up with sommelier competitions. At Vinexpo Hong Kong 2016 which will take place from the 24th to the 26th of May sommeliers and along with them the entire on-trade will play a major role. During this not-to-be-missed-event of the wine and spirits world many conferences, masterclasses and tastings will be specifically dedicated to sommeliers and will put a spotlight on on-trade relevant topics.

For all professionals Vinexpo Hong Kong will be the occasion to find new products and providers, to meet new contacts and to greet old ones. Just as Vinexpo Bordeaux 2015, Vinexpo Hong Kong 2016 will offer new services specifically tailored to the needs of Vinexpo participants and aiming at facilitating targeted business meetings between visitors and exhibitors thus helping to source specific products.

About Vinexpo
Vinexpo organises international wine and spirits shows in Europe and Asia. Vinexpo Bordeaux is a major event and the must attend show in the industry calendar. Every two years Vinexpo Hong Kong brings together producers from the entire world keen to break into the growing markets in Asia-Pacific. There is also Vinexpo Tokyo, a niche show specifically aimed at the Japanese market. Dates for your diary: Vinexpo Hong Kong from 24 to 26 May 2016, and Vinexpo Tokyo on 15 and 16 November 2016.