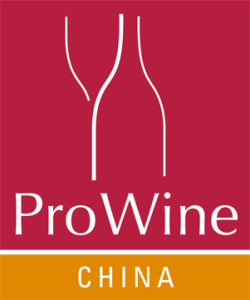 On November 13, ProWine China – a regional satellite event of ProWein, the leading international trade fair for wines and spirits – came to a successful end in Shanghai. For three days around 600 wine and spirits manufacturers from 33 countries presented their top products. At no other wine trade fair in China is such a wide range on offer. The trade fair presented 16 country pavilions and three regional pavilions. Most exhibitors came from France, followed by Italy, Spain and Argentina. Among them there were many large wine producers such as KWV, Les Grands Chais de France, Constellation Brands and LCW. Popular wine growing nations such as Australia and Chile exhibited with an official national pavilion for the first time.
This comprehensive range attracted the interest of 10,300 trade visitors. This is an increase of 25% (compared to 2014 with 8,250 trade visitors). Notable here: the expertise of trade visitors was extremely high, amongst them high-class importers, distributors, wine and spirits merchants as well as food and beverage managers, most of them travelling to the trade fair from outside of Shanghai. This again underpins the importance of ProWine China as the leading wine fair on the Chinese mainland.
Michael Degen, Executive Director at Messe Düsseldorf and Director of ProWein, is very satisfied with this development: “Last year we had discussions with our exhibitors if they want to come back or not. This year the question is not if they return but how much space is available. This confirms that we are on the right track with our satellite event of ProWein in China!”
ProWine China is jointly organised by Messe Düsseldorf (Shanghai) Co Ltd and China International Exhibitions Ltd. The fair runs concurrently with Food & Hotel China (FHC), China’s leading trade fair for imported food. Brendan Jennings, General Manager, China International Exhibitions also saw many positives, noting: “Results from this year’s show clearly demonstrate the quality difference with visitors between ProWine China and all other shows in China. Exhibitors reported meetings with only serious buyers and not time wasters.”
These points are confirmed by the exhibitors of ProWine China: “We decided to go ProWine this year and we will definitely be coming back because I think that this show attracts good quality visitors and it is also a very comfortable fair. Everyone we have spoken to has talked about real deals. After working here for over a decade, I have found new niche partners as well as partners wanting to work within our existing distribution network”, explained De Bortoli Wines GM Sales for Greater China, Matt Bahen. Franco Fang, General Manager of Sgarzi Luigi Wine (Shenzhen) said: “This is our third time to ProWine China. During every year’s ProWine China, we can meet importers from all over China. As the importer for Italy Sgarzi Luigi wine, we always value the quality of the visitors. And during 3 year’s participation, we noticed more and more buyers from all over China visit our stand. This is what we are very happy about.” LCW’s sales director Justin Moran was also impressed by the exhibition: “We were delighted with the caliber of visitors and out of all the major wine events held in the Asian region this has to be the most superior wine event held annually.”
Basis for Business, Platform for Networking and Knowledge Pool
In addition ProWine China offered a top notch supporting programme on all three days. After its successful premiere the “ProWine China Education Campaign” was held again, with wine seminars, workshops and discussion forums, attracting many trade visitors. Many of the events were organized by WSET (Wine and Spirit Education Trust). In addition Lv Yang, the wine director from Shangri-La Group, and Simon Zhou, the CEO of Ruby Red, participated in the discussion topics including “The specificity of the Chinese wine consumer market” at the second ProWine China Industry Summit. Also, numerous countries took the chance to hold seminars to promote their wine regions such as Austria, Germany and Hungary. This meant ProWine China 2015 offered not only the opportunity for targeted networking but also for comprehensive knowledge transfer.
Date for ProWine China 2016 confirmed
The next ProWine China will be held from 7 to 9 November 2016 (Monday to Wednesday!) at the SNIEC exhibition centre in Shanghai to match the greater China wine exhibition calendar.
Further Fairs in the ProWein Family
From 13 to 15 March 2016 the international wine sector will once again meet in Düsseldorf, Germany, for the leading international trade fair for wines and spirits. ProWein 2016 will then present 6,000 exhibitors from some 50 countries. In April 2016 Singapore will host the latest addition to the ProWein family of trade fairs: ProWine Asia will celebrate its premiere in Singapore from 12 to 15 April 2016. Further information on all events in the ProWein trade fair family can also be found at www.prowein-world.com or on the websites www.prowein.com and www.prowine-asia.com.