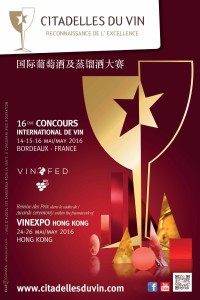 In homage to the world’s most famous wine region, Bordeaux wines have been
invited as guest of honour in 2016! It is the largest fine wine-producing region
in the world, with 155,000 hectares of exceptional quality: 60 regional, subregional
and communal registered destinations of origin, more than 5,000 châteaux, 40 cooperatives, 400 trading houses… The Bordelais is made up of several major sub-regions, the Médoc, the Libournais, the Sauternais, Graves, the Entre-Deux-Mers and the Côtes. The quality and diversity of Bordeaux wine is a result of the marked individuality of the region’s terroirs, its huge variety of grape varietals (majority merlot, cabernet sauvignon  and cabernet franc for reds, sémillon and sauvignon blanc for whites), and widespread local expertise in both winegrowing and blending. For enthusiasts, Bordeaux wines represent subtlety, balance and harmony…

And for the 2016 competition, a number of Special Prizes will be awarded…

ABOUT Cita delles du Vin :
As a member of Vinofed, Citadelles du Vin is dedicated to raising awareness of the diversity and quality of high-end wines from all around the world. Over 75% of participating are from outside of France, ensuring the OIV-recognized competition’s international prestige and significance.
Every year since 2000, over 50 international tasters have gathered in Bourg en Gironde to select the best wines from over 1,200 samples from around 30 different countries. These tastings award the coveted «citadelles d’or» and «citadelles d’argent» medals, as
well as a number of Special Prizes.