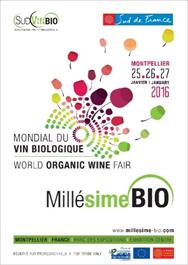 REVIEW: stability of visitor numbers at the trade fair this year
More foreign visitors and more importers
Millésime Bio has drawn to a close this year and the objectives set have been met: the trade fair has confirmed its position as leader on the organic wines sector. This year showed stability in visitor numbers with over 4 500 persons present, from 25 to 27 January 2016. The 23rd edition therefore showed the sustained interest in the event, with a notable increase in foreign visitors and importers.
Visitor side
In 2016, foreign visitors represented 25.5% of buyers against 22% in 2015. The growing enthusiasm of European markets for organic wines has been confirmed by a strong presence of European buyers from outside France (88.5% of the foreign buyers). The three best represented were Benelux* countries, which represented 16.6% of European visitors, followed by the Germans (11.25%) and the Scandinavians** (10.6%).
Wine merchants and importers were the best represented amongst professionals (respectively 18%, stable and 14.3%, higher than 2014).
Exhibitor side
873 companies were present this year. On the stands, some 15 nationalities were represented (i.e. 23% of exhibitors). The main foreign exhibitors were from Italy (9.5% of exhibitors) and Spain (6.2% of exhibitors). Producers from Central and Southern European countries presented the richest offer of organic wines at the trade fair, reflecting the dynamic global offer.