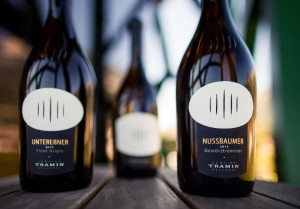 Alto Adige – Südtirol, South Tyrol – is the northernmost region of Italy, known for its fresh and aromatic white wines. Girdled with fruit trees in its valleys beneath the towering Alpine peaks, the region produces cool climate wines characterised by fruit-forward finesse. Above all, on the hills around the idyllic town of Tramin, ripening grapes benefit from the interplay of sunny days and the cool Alpine temperatures. Here, the grape varieties Pinot Blanc, Chardonnay and Pinot Gris – but particularly the indigenous Gewürztraminer – yield juicy, finely structure white wines, which combine seductive aromaticity and elegance with refreshing spice. Many of the region’s finest wines come from the Cantina Tramin, which thanks to its quality philosophy has made an essential contribution to the ascendancy of wines from the Südtirol.

‘Selection Series’ white wines only available as of January 2016
Complex and multifacetted wines profit from longer time spent maturing before release. For this reason, Cantina Tramin has made the decision to supply their Selection Series to the market substantially later than was previously the case. Thus the 2014 vintage was initially released in January 2016; this serves to enhance the individualistic character of these wines, giving each a more fully evolved expression of character. In addition, this very successful series has been given a new exterior expression: new bottles, optimised labelling – the outside of the bottle is now more in harmony with the top-quality contents!

To realise the full potential
The wish of cellar master Willi Stürz has finally become reality: We pay attention to the needs of the individual wines, allow them to rest for as long as possible, and then bottle them at the ideal point in time, so that the unique character of our white wines achieves a more complete expression. And furthermore: In recent years we have invested a great deal in our vineyard practices. And ultimately we wish to reap the benefits of these improvements – this means that after vinification, we are simply giving the wines more time to mature, so that their aromas can coalesce and harmonise properly.

A substantial challenge
This delay of more than half a year presented the estate with some substantial challenges. Such a decision involves a great expenditure of effort for a cooperative winery, since it is responsible for the 300 members – also known as co-owners – of the Cantina. In 2015, the co-op was obliged to endure a significant reduction in turnover, since a substantial part of the 2014 harvest would not be offered for sale until 2016. But the love of quality inspired the members of the Cantina to bear this decision without reservation. We are taking a short-term loss into the bargain, in order to profit in the long term, explains Wolfgang Klotz, their marketing and sales manager. This is being done because, over the long term, the more effectively wines from Tramin express the message of their native terroirs, so much better will they be able to maintain their position in the hospitality industry and among consumers. There’s business sense to this as well, says Mr Klotz.

Cuvée Stoan 2014
The Cuvée Stoan derives its name from the particular soil in which the grapevines flourish. The vineyards spread out above the town of Tramin at an elevation of from 400–550 metres above sea level, on rocky, calcareous, mineral-rich soils. After picking the grapes were delivered to the Cantina in small containers and pressed at once; fermentation then followed in wooden cask. The vinification and lees-aging (until August 2015) took place in large wood, after which the wine was allowed to mature in the bottle until January 2016.

Tasting note: The wine expresses itself in agreeable and inviting fruit tones with a refreshing element of acidity. Vinification in cask is very sensitively done, serving to accentuate the typical nuances of Chardonnay and Weissburgunder. Lightly aromatic and seductive notes in the bouquet from the Sauvignon Blanc & Gewürztraminer add elegance and a refreshing element to the cuvée. The wine is full-bodied on the palate, with a fine creaminess in the finish.

This wine is named in honour of the Unterebnerhof in the village of Söll, near Tramin, where these particularly special Pinot Gris vines grow at 400–450 metres above sea level on southwesterly-exposed hillside sites. The gravelly clay soil with its high limestone content is responsible for the even and steady growth of the vines and the high quality of the grapes.

Tasting note: After harvesting, the grapes were delivered to the winery in small containers and pressed at once. The fermentation that followed transpired at a controlled temperature of 18–20°C in cask. Vinification was conducted 80% in large wood and 20% in tonneaux of 500 litres, in which the malolactic fermentation also took place. The wine was bottled in August after the vintage, then allowed to rest until January 2016. It exhibits fine, elegant aromas of blossom honey and tropical fruit, with a flair of vanilla and buttery notes; texture and acidity are very well balanced.

All the grapes for our Gewürztraminers come from the vineyard site Söll bei Tramin. Söll rises above the town of Tramin to an elevation of come 350–550 metres, seated at the foot of a range of hills around Monte Roen. Furthermore, the entire region is nicely ventilated throughout the vegetation period by a wind known as Ora, which blows its way up from Lake Garda each day in the early afternoon. After picking, the grapes were delivered to the cellar in small containers, then pressed after a short period of maceration in order to capture the varietally typical flavour characteristics of the Gewürztraminer. The grape must was fermented in stainless steel tanks under temperature control; the wine rested on its lees until August 2015, with further maturing in the bottle before release in January 2016

Tasting note: The name Nussbaumer is derived from the wine’s point of origin, the Nussbaumerhof in Söll, which with its 700 year history of grape growing is one of the oldest farmsteads in Tramin. The wine presents itself in a luminescent and intense straw-gold, unfolding aromatic notes of rose petal, cinnamon, tropical fruits and cloves in the glass.

Cantina Tramin:
The Cantina Tramin – founded in 1898 and thus today one of the oldest cooperative wineries in the Alto Adige – has 300 member growers, respectfully termed ‘co-owners’, who cultivate 260 hectares of vineyard in and around the renowned wine town of Tramin. The vineyards of Cantina Tramin (Kellerei Tramin) are situated among the municipalities Tramin, Neumarkt, Montan and Auer at an elevation of 250–850 meters above sea level. Connoisseurs consider the white wines from the region Alto Adige/Südtirol to be among the finest in Europe, and among the most interesting, in that seldom-encountered grape varieties and unusual terroirs frequently come into play here.