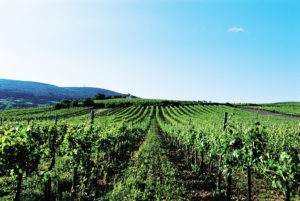 Due to devastating frost damage last spring, a small crop is expected.

“The frost catastrophe last spring leaves Austrian winegrowers currently facing a diminished vintage in terms of quantity, although there is a good crop of grapes now hanging on the vines in many regions. After the massive late frosts at the end of April, unstable and muggy weather unfortunately led to ruinous hailstorms as well, starting at the end of May. The Steiermark and Südburgenland were hardest hit by the hail, but wine-growing regions around Lake Neusiedl and the northern part of Niederösterreich also reported damage to 1,200 hectares of vineyard. According to Austrian hail-insurance authorities, the total damage to viticulture alone stands to date at 2.5 million Euros. Now, winegrowers are hoping for a dry and pleasant September, so that the remaining grapes can quickly achieve full ripeness while remaining as healthy as possible. If this happens, we could anticipate another vintage of excellent quality,” says Johannes Schmuckenschlager, president of the Austrian Viticultural Association, evaluating expectations for the 2016 vintage.

Regions, harvest yields, and the outlook
“When one considers the extreme weather phenomena we have faced this year, it is no wonder that we are figuring on the 2016 vintage being a modest one in terms of volume. Particularly in the Steiermark, which was most heavily effected by the aforementioned frosts, growers are expecting a crop that will be some 25% of normal size. Burgenland, which suffered extensive frost damage as well, is hoping to perhaps achieve 50% of a regular harvest. In Niederösterreich, the situation varies locally and must be treated thus. Some regions – the western Wachau and certain areas in other wine-growing regions of Niederösterreich – were seriously damaged by frost, often in low-lying vineyard sites as well. In other parts of the state, very good yields are anticipated. On the whole, Niederösterreich is considered to be expecting an average grape harvest in terms of overall volume.”

Based on estimates in the individual wine-growing regions, the wine harvest this year looks to be somewhere in the neighbourhood of 1.8 million hectolitres. Schmuckenschlager comments, “This is even more unfortunate, since 2016 will now be the fifth vintage in succession of less than average size.”

Weather conditions in 2016: late frosts, hail and a great deal of rain
Viticulture got off to an optimistic start in 2016, with respect to the vegetation period. Unfortunately, overnight freezes from the 26th to the 29th of April brought catastrophic consequences for many farmers in Steiermark and eastern Austria. Grape growers too were badly affected by the frost damage – a relatively early budding was met by unusually heavy night-time frosts, for which reason – especially in the Steiermark but also in Burgenland and certain regions of Niederösterreich – devastating damage must be reported. Secondary buds, which subsequently sprouted in the damaged vineyard sites, have naturally shown a very modest fruit set.

A spell of sultry weather during late springtime and the summer months was characterised by high temperatures on the one hand – frequently above the 30°C threshold – but at the same time continuously interrupted by rainfall, heavy at times. This served to drive the development of vegetation smartly forward in the damaged areas as well as in those that had remained unaffected by hail. Because of this intermittently ‘tropical’ greenhouse climate, winegrowers were challenged in particular to guard against vine diseases such as peronospora and powdery mildew, as well as keeping the rapidly growing greencover underneath the vines in check and effectively addressing wild growth in the foliage canopies.

Mr. Schmuckenschlager tells us: “Since the ground in the vineyards is more than adequately supplied with water and the vineyards are currently showing abundant growth, growers are now hoping for a few dry and sunny weeks, so that the clusters can become fully ripe. If this proves to be the case, our winegrowers can look forward to another vintage of exceptional quality.”

Start of the harvest: mid-September
Apart from the grapes used for making “Most” and “Sturm”, this year’s harvest will properly begin in Burgenland in the middle of September. In Niederösterreich, the main harvest will most likely commence at the end of September.

Frost damage: aid from Disaster Relief
Although frost in wine production is a risk that estates can be insured against, the federal government and affected states have already swiftly agreed to offer assistance out of disaster relief funds to wine producers (along with other agricultural enterprises affected) whose existence is threatened because of frost damage. Wine estates that harvest less than 2,000 litres per hectare this year will be able to apply for compensation under these special guidelines. Determining factors of course include other agriculturally cultivated acreage and an estate’s potential non-agricultural income. Estates insured against frost that fall under this threshold of yield will likewise be compensated for the remaining difference, figured against their basic subsistence incomes.