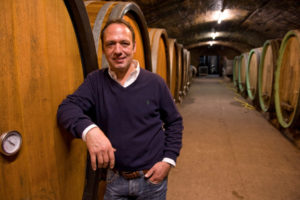 The wine-producing Staatsdomäne was established in the year 1904 on a southerly slope in the Serrig River Valley – a side valley of the Saar, itself a tributary of the Mosel – by the King of Prussia. The winery developed into a model estate, characterised by exemplary cultivation of its vineyards and progressive vinification practices. Before the First World War, Domäne Serrig was one of the largest wine estates in Germany, with some 30 hectares under vines, and their wines were counted among the most prestigious in the region. The domain was not privatised until the year 1990.

Now, one of the most passionate and charismatic growers in the Mosel Valley has acquired the former Staatsdomäne. Markus Molitor began his career as a winegrower at the age of 20, and has since then been a tireless promoter of steep-slope Rieslings from the Mosel and the Saar, where he in the meantime has come to cultivate 15 top vineyard sites – a total of more than 80 hectares, vinifying a marvellous array of widely varied selections. His wines from the slate soils of the Mosel are served worldwide in the finest restaurants, evaluated with the highest scores by the experts, and regarded as sought-after rarities by collectors.

“I certainly can’t complain that I am bored,’ says Mr Molitor, who remains personally responsible for every decision in his cellar in Bernkastel-Wehlen, and always carries out each operation in the production of his highly prized wines himself. ‘But the possibility of obtaining an undivided expanse of 22 hectares of vineyard – I could not pass that up.”

Molitor’s vineyards on the Mosel are spread out over a total of more than 170 individual parcels; this poses an immense logistic challenge for the grower. Furthermore, many of the parcels are so small and tightly structured that their cultivation is strongly influenced by that of growers who work the neighbouring tracts. Molitor tells us, ‘Anybody working under these conditions is sure to see any substantial unfragmented vineyard as a gift from heaven…’