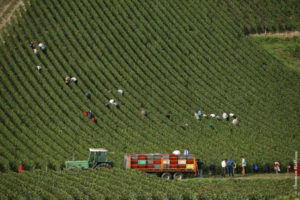 Once again, the annual growth cycle in Champagne gave some cause for concern. Hopes were dashed for some, while others harvested a very promising crop…
Looking back over the seasons
In the “Marne” area, where Deutz possesses or sources nearly all its grapes, the mild, dry Winter was followed by a cool, wet spring. The Spring bud burst took place around 15th April for the Chardonnay, 19th April for the Pinot Noir and 22nd April for the Pinot Meunier.
The wet conditions in the evening of 26th April, followed by minus temperatures on the morning of 27th, resulted in some frost damage, but fortunately only certain parcels were affected (lower slopes of the Côte des Blancs).
Early May saw some heavy rainfall. Our teams had to check for outbreaks of mildew every day and take appropriate action. Thanks to the conscientious work of our staff, mildew was kept in check right until the end of the harvest.
June continued in the same vein with more heavy rain. During May and June the recorded rainfall levels were two to three times higher than normal.

Because of these difficult weather conditions, vine growth was about 10 days behind normal and the peak of flowering was recorded, depending on the areas, between 21st and 24th June. The vine continued growing in good sunny weather conditions which were generally beneficial in view of the weather earlier in the season. However, some coulure could be seen, especially on the more advanced plots.
Summer finally arrived in August. At last the rain stopped and the temperatures rose. The ripening of the grapes proceeded well. According to the date of flowering and the dictum “100 days from the flower to the harvest”, the 20th September was the predicted harvest date, however the 12th September was finally agreed upon by the Comité Champagne; particularly for the Pinots crus which, mysteriously and very unusually, ripened before the Chardonnays, taking an average of only 85 days to reach maturity! Something very rarely seen!
At Deutz, the harvesting teams led by Patrick Boivin, Vineyard Director, and his right-hand man, Cédric Georget, picked up their secateurs and snipped the first bunches in the Aÿ, Mareuil and Pierry plots on 17th September. This later date was to allow the grapes to reach optimum maturity.
They decided to start harvesting the Côte des Blancs Chardonnays 10 days later.

First impressions
Concerns about the yield throughout the vegetative cycle turn out to be unfounded. Due to the good weather conditions, the bunches are very nice, very nice indeed! And along with this quality boost, comes an increase in quantity!
The yield, set at 9,700 kg /ha is often exceeded, with the average at Deutz being 10,200 kg/ha.
In terms of quality, the variable weather conditions had us fear the worst and yet the health of the harvested grapes is outstanding. There very little sorting required.
After the pressing, Michel Davesne, the Chef de Caves, and his assistant, Olivier Bernard, are delighted with the must readings, with an average of 10.2% vol. in terms of potential alcohol and 7.7 g/L H2SO4 in terms of acidity.

The readings are exceptional for the Deutz noble terroirs, both for the Pinots Noirs (11 % vol. for the Aÿ “La Côte” plot, and 10.9 % vol. for “Meurtet”) and for the Chardonnays (10.9% % vol.) which also show good acidity.
Vintages ending in “6”
However, although the outcome proved to be better than expected and although all the conditions would suggest an excellent vintage, Fabrice Rosset, our Chairman and CEO, reminds us yet again that for this vintage, as for the previous ones, “only the wines will decide”, when the still wines are tasted.
And as we prefer to take our time at Deutz, this tasting will only take place around March or April. Not before then can we talk about a possible “William Deutz 2016” or an “Amour de Deutz 2016”… Even if we would rather like to uphold the reputation of the vintages ending in “6”!