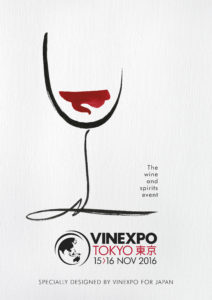 Tokyo, 17th November 2016 – A great success with both visitors and exhibitors, Vinexpo Tokyo closed its doors yesterday. The event, which took place at the Prince Park Tower hotel in Tokyo on November 15 and 16, had been specifically tailored to suit the needs of Japanese wine and spirits buyers and focused solely on this singular, yet mature market. The exhibition with its unique and efficient format seduced the Japanese trade offering an international and diverse array of wines, from premium to niche.

Guillaume Deglise Vinexpo CEO stated, “This second edition of Vinexpo Tokyo showed, just how well the know-how of the Vinexpo brand can adapt to the specific requirements of a market.”

With a significant rise in visitor numbers as compared to the 2014 edition +33%, Vinexpo Tokyo 2016 set the foundation for future Vinexpo events in Japan.

The great diversity of wines and spirits from around the world attracted Japanese buyers keen on sourcing premium wines, as well as products from regions not yet largely distributed in the country, such as wines of Moldova, New York, or Greece.

“Japan is Asia’s most mature market, on-trade buyers and sommeliers are increasingly interested in niche products such as ours. Here at Vinexpo Tokyo we had a lot of sommeliers coming to our stand to taste and source wines with which to surprise their clients and add value to their wine lists,” stated Souheil El Khoury, owner of Vins d’Olive, one of the Japanese importers, who poured the wines at the Greek stand.

Unlike its Bordeaux and Hong Kong counterparts where buyers from around the globe meet producers from various countries, the Tokyo event brought an international wine and spirits offer to one single market: Japan. This unique set-up made Vinexpo Tokyo stand out from the other Vinexpo events around the world, whilst distinguishing the exhibition from the usual shows in Japan, thanks to its characteristic Vinexpo approach combing elegance and know-how.

Indeed, Vinexpo Tokyo, is the only B2B exhibition in Japan specially dedicated to wines and spirits. It offered the Japanese trade two days of exclusive wine tastings, such as the high-class Italian wine tasting of the “Tre Bicchieri” selection by the famous wine guide Gambero Rosso and brought some of the world’s most renowned wine experts to Tokyo.