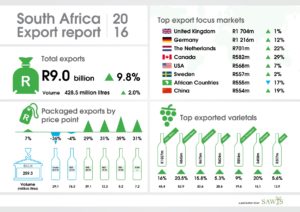 Despite 2016 being a challenging year for the industry in many ways, we are excited to report a positive growth. The 9.8% increase in value to R9.0 billion and a 2% increase in volume to 428.5 million liters of wine sold internationally. This figure fits into the Wines of South Africa (WoSA) strategy for an increased value focus within packaged and bulk wine sales.

Within this segment, the category of wines priced between R80-R99.99 per liter showed the most significant value increase of 39%, whilst sales of wines costing under R19.99 per liter decreased by an astounding 76.2% in value.
SA’s top export market, the UK, realised a total value of R1,704m worth of exports, however the market growth has slowed down with a mere 1% increase in volume. Germany in second place is showing solid growth with a 12% increase to R1,216m of wine bought with the Netherlands in 3rd position at R701m with impressive growth of 22%.

The biggest value jump in growth last year came from Canada where a 29% increase saw it moving into 4th place in terms of importance with a total export value of R582m.

While Europe is still South Africa’s leading wine export destination, we have seen results from the focus on developing both China and the USA with growth of 19% and 7% in value respectively.

Disappointingly, an area of decline was in the combined region of Africa, which saw numbers going down by 17% to R555m, influenced strongly by Nigeria and Angola. This can be directly attributed to the link to the oil price and availability of US$ to pay for exports which severely affects the markets.

In terms of the top rated varietals, white wine still leads the pack in value growth with Chenin Blanc taking the top spot, closely followed by Sauvignon Blanc and Chardonnay. While Shiraz leads the red wine volume exports, it was proudly South African varietal, Pinotage, showed highest value growth in the reds with significant growth of 20%.