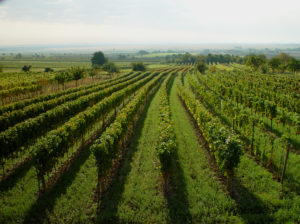 Imagine the vegetation cycle and vintage as a roller coaster ride: this is precisely the memory that Austrian winegrowers and friends of Austrian wine will retain of 2016. But all said and done, there is good to magnificent quality in white, red & sweet wines – in some cases with severely limited quantities.

Following a warm and dry winter, vines in many winegrowing regions went into budding rather early. A massive cold snap in the last week of April led to horrible frost damage, and because of the unusual large-scale weather pattern, even higher-elevation vineyards were affected. Particularly hard-hit were the entire Steiermark, the growing districts Neusiedlersee and Eisenberg in Burgenland as well as Carnuntum, the Thermenregion and the westernmost section of the Wachau near Spitz in Niederösterreich. By contrast, there was hardly any frost damage reported in Wien/Vienna or for the other regions of Niederösterreich, where above-average harvests helped to raise the median volume for Austria as a whole.

After a relatively moist spring, summer 2016 also featured a great deal of precipitation, but no protracted heat waves. Many rainy days brought considerable danger from malign infestations, as well as peronospora and oidium. In the last week of August things changed for the better, and a period of sunny and stable weather set in, which essentially held up all through the primary harvest. Even if there was a bit of botrytis here and there, the time of the harvest could be deliberately fixed in most cases.

Balanced, varietally typical white wines with good depth of fruit
Based on initial tastings of the new wines, we can look forward to well-balanced, fruit-forward, varietally typical whites. Alcohol levels are significantly lower than the previous year with good extract content, while acidity values generally lie higher than 2015 without being too intense. The lighter class of Grüner Veltliner is turning out better than it has for a long time. Beyond having good body, the premium Veltliners combine radiance with a sense of delicacy. The other principal varieties Riesling, Weissburgunder, Chardonnay and Sauvignon Blanc should as a rule also yield fruit-driven and purely flavoured white wines – with respect to which, one should be sure to make timely reservations for bottlings from the frost-damaged regions because of the limited volume.

With Muskateller, there seems to be a wide variance in character, ranging from very delicate and fresh wines to others that are florid and a bit obvious. In the Thermenregion, indigenous varieties Rotgipfler and Zierfandler have turned out to be unusually well focused and harmonious. And the capricious Roter Veltliner – typically done no favours by years when there is danger of botrytis – has turned out firm and distinctive, as nicely as in 2015, for example. For Riesling, it is too early to make a detailed assessment, but the wines appear to be very clear and lively, whereby the stone-fruit aromas stand in the foreground against a racy acidic structure. And throughout Austria there is no cause for complaint where the Pinot family is concerned: Chardonnay and Weissburgunder as well as Grauburgunder have yielded powerful wines that are also finely composed, which offer opportunities for long-term cellaring.

The white wines in Burgenland are displaying very similar characteristics, even if they occasionally appear a bit fleshy and corpulent, but the expression of fresh acidity here exerts an even more positive effect. And for the Steiermark, the harvest shortfalls have already been mentioned several times; this has had definite, unfortunate consequences for the lighter ‘village’ wines. However, Styrian growers have specially endeavoured to deliver their single-vineyard and premium wines. Early tastings show Sauvignons and Morillons of laudable concentration, which glide over the palate in a precociously elegant, nicely rounded and well-balanced manner.

Winegrowers in the capital city Wien are reporting with radiant countenance upon the 2016 vintage. Apart from slight losses due to botrytis, there was – finally! – no hail and no horrid weather this year, and producers were able to harvest an above-average volume at high sugar gradations. Wien’s entire variety of white wines seems to be successfully done, with convincing structure across the board; the Wiener Gemischter Satz has attained a gratifying level of ripeness, which benefitted even more from the favourable harvest conditions of 2016.

Red wine ranging from firm to lavish
In the red department it is extremely difficult to make a general pronouncement on this occasion, since the performance varied so much in the different Austrian red wine hubs. On the one hand, there are some relatively severe and somewhat austere wines, which in terms of style and body can best be compared with the vintages 2004 and 2007. On the other hand, there are uncommonly well-concentrated and nicely focused examples, whose extract and abundant tannins are in no way deficient even compared with the very best of Austrian red wine vintages. All wines benefitted from generous sugar levels, more than adequate dry extract and a seemingly robust but in no way angular or unripe tannin content. Some Zweigelt possess so much dark fruit and substance that they can be mistaken for similarly styled Blaufränkisch. And the Blaufränkisch themselves are particularly dark of tone, showing aromas of blackberries, plums and sour cherries – this can very well turn out to be an exceptionally fine vintage at the better addresses. Cabernet and Merlot also achieved the necessary ripeness, and lack for nothing as far as body and tannins are concerned.

Sweet bounty of the icy hours
It is too early still to make a final evaluation of the Prädikat wines. All told, there is a smaller harvest volume than normal. But very gratifying indeed is the frosty coda to 2016, which played out in the form of many Eisweins. In both December and January 2017 there were enough nights with the requisite cold, so that numerous growers were able to produce racy and firm Eisweins, which also convey a substantial sense of varietal typicity.