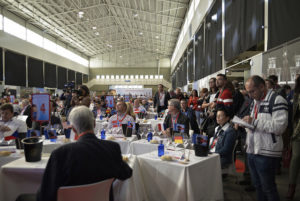 Valladolid, 5 May 2017. The 24th Concours Mondial de Bruxelles (“Concours Mondial”) started today in Spain. 320 journalists, buyers, oenologists and sommeliers from across the world gather together in Valladolid to judge the wines. The 9080 wines from 50 countries will compete for a Silver, Gold, and Grand Gold Medals. Two new categories, for old vintage and organic wines, are introduced for the first time now.

“Each year Concours Mondial is held in a different place to help the wines of a region and its wine tourism gain international visibility”, Thomas Costenoble, director of CMB comments. “Companies from the Castilla y León region will build contacts with renowned industry experts in just a couple of days”, he concludes.

2002 wines will represent Spain this year – an increase of nearly 25% compared with 2016. The prevailing part is from local, Castilla y León region, grape varieties: the red Tempranillo and Mencia, and the white Verdejo. 118 of all the Spanish wines are organic and biodynamic.

573 wine makers from Spain will compete for an award: huge companies with thousands of hectares and over 80 properties, and small producers with capacity of 150 000 bottles.

According to the International Organisation of Vine and Wine (OIV)[1], Spain is “a clear leader in cultivated surface area with nearly a million hectares”. It is the biggest exporter with 22.9 mhl and a global market share of 22%.

Spain has taken part in Concours Mondial since the beginning: 49 wines, in 1994. The country has ranked second in number of submitted samples for over two decades now.

In 2016, Spain was the country to have won the highest number of Grand Gold medals by the Concours Mondial[2].

The 2017 Concours Mondial results will be announced a week after the contest online at: http://results.concoursmondial.com/. Medals help experts, connoisseurs and wine lovers choose the best and the trendiest wines.

Concours Mondial de Bruxelles is the only touring competition in the world and the only to perform quality control tests of the awarded wines.