China to become world capital of wine in 2018 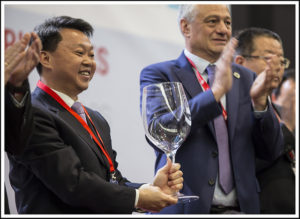 Valladolid, 7 May 2017: China will become the world’s capital of wine in 2018. Concours Mondial de Bruxelles (CMB) has chosen to host its 25th event in the Haidian district of Beijing. For the first time in a history spanning over two decades, the travelling contest has selected a host country outside Europe. The choice was announced on the last day of the 2017 competition when the mayor of Valladolid, Oscar Puentes, solemnly handed over the Concours Mondial wine glass to Mingjie Chen, the deputy mayor of the Haidian district of Beijing. A cocktail of typical Chinese spirits, Baiju and Liqueurs, and a gala event with Chinese wines were prepared by the new hosts to mark the occasion.

“China is definitely the place where the wine sector is developing the most in terms of production and consumption”, commented Baudouin Havaux, Chairman of the Concours Mondial de Bruxelles. “China has become the biggest market for some of the leading wine producing countries in the world. Winemakers’ associations are setting up businesses there, opening regional offices and building up sales networks. Growth rates are higher than in any other market. With 847,000 ha of vineyards, China is now the 2nd largest wine-growing area in the world[1] (with Spain at the top, and France in 3rd place).

As a leading wine competition we always keep a close eye on market trends. Observing the dynamic development of the Chinese market we decided that it was high time we focused on this major player”, concluded Baudouin Havaux.

The Deputy Mayor of the Haidian district of Beijing, Mingjie Chen, has supported the Concours since talks about China as a host began. The organizers stress that it will be the largest tasting ever held in the country. This is the first time a wine competition of this magnitude and significance will be held in Asia. By travelling to China, Concours Mondial not only offers an opportunity to explore the most dynamic wine market in the world, but also opens its doors to a new cultural arena.

In 2017, Chinese wine entries in the CMB posted an increase of 112.5% compared to 2016, and nearly 250% since 2015. According to the International Organisation of Vine and Wine (OIV), China’s vineyard area continues to increase (+17,000 ha between 2015 and 2016), making it “the main growth area of vineyards worldwide”[2]. China is the 5th global wine consuming country (preceded by the USA, France, Italy and Germany), the 5th largest global importer of wine in terms of volume, and the 4th biggest global importer by value (closing in on Germany). Chinese domestic demand is “the biggest contributory factor to trade growth”.

The 25th CMB will be held from May 11 to 13, 2018, in the Haidian district of Beijing. Haidian is the scientific and technological innovation district of Beijing with a population of 3,590,000 and the home of many Chinese universities. The district is a world-renowned focal point for higher education and scientific research institutes. It is the centre of the Chinese IT industry and is hailed as a model of entrepreneurship and innovation. There are 1,107 registered companies with annual revenue of more than 100 million USD in Haidian.

Concours Mondial 2018 is organised with the support of the Beijing Municipal Government and the Beijing International Wine and Spirit Exchange (BJIWSE), a company professionally committed to the wine trade, serving customers across the world.

CMB is the only touring competition in the world, with 23 years’ experience. A recent informal survey among judges showed that the post-event checks of the awarded wines are among the competition’s main distinguishing features. CMB is the only wine competition to perform such quality control tests.