2017 Concours Mondial de Bruxelles: The results are out! 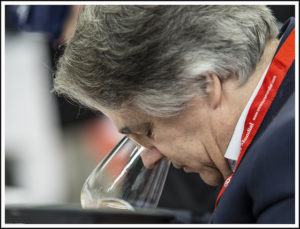 The top ten medal-winning countries this year are Spain, France, Italy, Portugal, Chile, China, Bulgaria, South Africa, Switzerland and Greece (both on place 9) and the Czech Republic. Host country Spain has the highest number of medals (last year Spain came second, after France) spearheaded by Castilla y León with 29.4 % of Spanish accolades. Italy, Portugal, Chile and Switzerland hold the same place in the top ten as they did in 2016. Conversely, China moves up two places, after being awarded more than twice as many medals as the year before (78 medals in 2017 vs. 36 in 2016). Greece and the Czech Republic are “the new kids on the block” in this year’s top ten.

693 organic and biodynamic wines were entered in the 2017 Concours Mondial. The number of entries in this category has grown by a staggering 80 % over the past three years. Current market trends and higher consumer awareness and interest in the origin and production methods of wines prompted the competition’s organizers to create the new “Organic Wine Trophy”. The winner of this prestigious medal, awarded for the first time in 2017, is a winery from Turkey.

Another new medal made its debut this year at Concours Mondial: the award for “Exceptional Old Vintages”. The quality of nine Portuguese wines swayed the panel which awarded them the highly-sought-after medals. Portugal was the absolute leader in the old vintage category followed by Spain, Slovakia, Italy, Hungary and Switzerland.

Concours Mondial de Bruxelles award-winners are not just recognized for their quality, they also offer excellent value for money. 57.6% of all awarded wines in 2017 sell for under 8.50 euros ex-cellar.

Concours Mondial de Bruxelles is the only wine competition to perform post-event sample checks in order to ensure the consistent quality of its medal winners.

The next Concours Mondial will be hosted by the Haidian district in Beijing from May 10-13, 2018