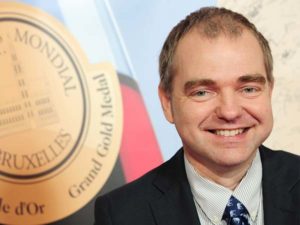 INTRO: The Concours Mondial de Bruxelles is the only competition in the world to conduct post-event checks on medal-winning wines. But from sample preparation to marketing award-winning wines, its organisers have a rigorous and methodical protocol for ensuring its endorsement is a 100% reliable buying cue for consumers. Competition director Thomas Costenoble describes the numerous checks conducted before, during and after the event.

How are samples checked before and during judging?

We have set up three main platforms – one in Italy, one in France and another in Spain – for collecting samples with the remainder assembled in Belgium. All the bottles are listed, sorted and photographed with their labels and back labels. Then they are collated with information in the database and the analysis report that we receive systematically. Once everything is in order, the database is transferred to the Belgian ministry for economic affairs to check that the labelling complies with European legislation. A Brazilian Champaña, for instance, would not be allowed to enter. We receive four bottles per entry: bottles A and B are sent to the competition venue whilst bottles C and D return to Belgium where they are centralised in a temperature-controlled warehouse and stored for two years. They are used as control samples for post-event quality checks. During the competition, bottle A is judged and bottle B acts as a back-up in the event of a problem, for instance if the wine is corked or the bottle broken. The remaining B bottles are shipped back to Belgium after the competition. Once judging has finished, the results are compiled and post-event checks are conducted by ‘ambassadors’ in different countries who collect award-winning bottles from stores. The logistics and sample collection are extremely costly and are paid for by the sale of medal stickers: the more stickers we sell, the more checks we conduct. Hence, award-winners pay for them but the procedure only makes the medals even more reliable ultimately.

During judging, what precautions are taken to ensure the wines are tasted in the best possible conditions?

We hold the tastings in professional venues to ensure optimal storage conditions for the wines. The bottles are brought to the venue a week before the competition so that the wines can rest before being judged. For the whites, rosés and sparkling wines, refrigerated containers are used and the reds are stored in temperature-controlled facilities at between 16 and 18°C. The bottles are identified using a double numbering system to ensure total anonymity: no-one can identify a wine by the numbers displayed on the bottle. The involvement by the Belgian authorities is extremely significant: even when the competition is held abroad, the Federal Public Service Economy conduct an in-depth analysis of all the reports. They have been extremely helpful in setting up all our monitoring procedures. We have developed a constructive relationship with them over the long term which in my opinion makes the Concours Mondial de Bruxelles unique.

Are there any quality checks on the judges themselves?

We have conducted extensive statistics research to prevent the Concours Mondial de Bruxelles from becoming a lottery whereby a wine judged by a lenient panel is more likely to win a medal and vice versa. Through the scores awarded by judges we have been able to demonstrate linearity proving there is a consensus. After the competition, the judges themselves receive a chart featuring several statistics criteria including ‘discrimination’ or a judge’s capacity to use the entire tasting sheet. Judges must not always award the same scores because that would imply that they cannot tell the difference between a good and a bad wine. The second criterion is repeatability or the ability to award similar scores to the same wine: a single flight may feature the same wine twice so that we can assess this ability. The third item is the consensus between a judge and his/her panel: if there is a systematic discrepancy between a judge and his/her panel, this is an issue. If it occurs then ultimately the judge will no longer take part in the competition. Before we introduced our statistics monitoring in 2005, discrepancies could occur from one panel to the next, depending on whether they were lenient or strict. We found a way of weighting scores awarded by a lenient or a strict panel. The percentage of medals now varies between 19 and 37% from one panel to the next, which is a logical gap if you take into account the potential differences in quality between flights of wines. The total percentage of medals, however, is never in excess of 30%. The aim of all these checks is to make the competition reliable and credible for opinion formers.

Once a medal has been awarded, what steps are taken to guarantee that the medal matches the wines sold in store?

When the bottles are collected in stores, we notify the distributor in writing. A letter is sent to supermarket purchase managers, and to the producer. We notify the producer that the distributor has been informed of our sample collection. As soon as we have collected between 25 and 30 bottles, we send them to a Cofrac-certified laboratory. We convene a group of oenologists and conduct an organoleptic tasting, which we take part in, to compare the sample we have collected with its control sample. Once it has been confirmed that the two wines are similar and representative, we go no further. If, however, there is some uncertainty, the wine undergoes a Cofrac analysis based on classic criteria such as residual sugar, alcohol content, volatile acidity and SO2. If these criteria do not match up, the Cofrac procedure allows us to be 99.9% sure that this is not the same wine.

What measures are taken if wines do not comply with competition rules?

As soon as the laboratory certifies that the sample taken does not match our control sample, the distributor and producer/marketer are notified in writing and the bottles must be removed from stores. This situation arose last year when a producer/marketer could not remove medal stickers from bottles and had to remove the bottles themselves from stores. If this is not done, a complaint is filed with trading standards and the company is banned from taking part in the competition for 5 years.

How do you check compliance for sales of medal stickers?

When a wine is entered, the producer must stipulate the production volume for the sample, for both bulk and bottled wines. This information is then filed in the database and we can only sell the matching number of bottle stickers. If there is an inspection, we pass all the data on to trading standards. As the competition is under the legal supervision of the Belgian federal ministry, as soon is there is a discrepancy between the volume stated and the number of bottle stickers ordered, trading standards becomes involved.

In what way do you think CMB is different to other competitions?

We are the only competition to conduct post-event checks, which involves extremely costly, onerous logistics and expensive analysis procedures. We believe, however, that it is essential to do this and to publicise it. In a way, we view the checks as drug testing in sport – they are designed as a deterrent. Also, the results of many competitions are skewed by the number of medals awarded which can be staggering. We do not aim to award medals to 80% of entries. If the quality of the vintage is below average, our medal percentage can be significantly under 30%. A lot of competition organisers consider the OIV standard to be the norm whereas we view it is an absolute maximum and often award medals to no more than 27% of entries. In an era of competition bashing, our ambition is to show that the Concours Mondial de Bruxelles offers a genuine, reliable service to both industry members and consumers.