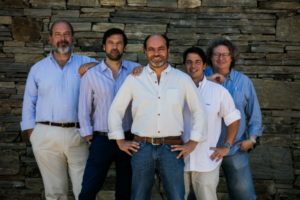 The attendees were already old hands at this: they knew their way around the world of fine wine, had personally visited the most exciting wine regions – still it left them speechless, these participants in last week’s international gathering in the Douro Valley. Sommeliers, importers and wine merchants from thirteen different countries were invited by the Douro Boys to come to their region in the north of Portugal, where they spent three days devoted to sophisticated, high-class vertical tastings and intense discussions, before returning home with previously unimagined experiences and unmistakable enthusiasm.

invited twenty-five international wine experts from thirteen nations – from Brazil to Japan – to a wine summit in the Douro Valley on 15–17 June.

Anybody who has ever had the pleasure of attending a Douro Boys event knows for certain that they’re in for a programme that’s absolutely top-of-the-line. Along with meeting the demand for presenting the diversity – as well as the distinctive nature – of the Douro’s wines, the level of culinary pleasure and general conviviality also left nothing more to be desired.

These international experts received an extensive and detailed update on the wines of the Douro Valley, presented in four master classes:

1. Monovarietal wines versus blends: Which are the most important of the many unpronounceable grape varieties of Portugal (Touriga Nacional, Touriga Franca, Tinta Barroca, Sousão…)? What are their salient characteristics, and how do they influence the flavours of a cuvée?

2. Discovering the white side of the Douro: As much as it was difficult for many wine experts twenty years ago to imagine that the Douro – in addition to its magnificent Ports –could be the source for high-class red wines, the Douro now delivers another surprise with its refreshing white wines and their lively acidity.

3. Aging potential of Douro wines:  It’s been barely twenty years since a new wave of quality swept over the Douro, and dazzled the world of fine wine with its magnificent red still wines. In this respect, the oldest wine appellation in the world is also one of the youngest. The impressively ageworthy nature of these wines is easily confirmed in tasting older vintages, thanks to their concentrated tannins and firm acidity

4. The genealogy of Port: The various categories of Port often lead to moments of anxious confusion and hesitation for consumers. How does one tell the styles apart, and how could these distinctions be communicated more easily? Here our visitors had the opportunity to enjoy some extremely rare older vintages, which were pulled from the cellars just for this occasion.

In between the elaborate and polished tastings at the quintas of the Douro Boys, traditional Portuguese dishes like Cabrito and Bacalhão were served, with fresh salads and vegetables from the estates’ own gardens, along with magnificently spicy cheeses and the region’s famous salted almonds.

And of course there had to be a boat ride on the Douro River on the docket. Since the thermometer hit 40°C in the shade, a cooling dive into the swimming pool also became a welcome part of the proceedings.

On the last evening at Quinta do Vallado, the pool party ran to late at night, where friendships were formed and lively exchange of opinions took place over exceptional, previously unknown Douro wines that the visitors tasted.

The enthusiasm of the participants was enormous. The combination of the hearty and good-humoured hospitality of the growers with the sophisticated professionality of the wine tastings was just as distinctive as were the wines themselves. Here’s what we heard from the visitors:

‘I have never been on such a great wine trip’.
‘I am so totally impressed by the diversity of the wines’.
‘I never imagined that Douro white wines could be so fresh, with this great acidity’.
‘The Douro Boys & Girls are great hosts – it feels like coming home, from the first moment when you arrive’.
‘I will come back, for sure’!

Dirk van der Niepoort comments: ‘It made us very proud to see how many fascinating and imaginative young people responded to our invitation. It shows that we are on the right track, and that we have already accomplished a lot. But it also shows us that our task as ambassadors for Portuguese wines has not yet been fully accomplished – if that can ever be done…’

Francisco Ferreira from Quinta do Vallado continues: ‘We Douro Boys also profited a great deal from this summit, because it provided a priceless exchange of info and opinions with attentive & interested, wine-focused individuals, in a casual and relaxed atmosphere. And it’s not just about the business end – it became an honest, shared emotional experience, grounded in our common inherent enthusiasm for wine.

About the Douro Boys:
The Douro Boys – a group of five highly regarded wine producers from the Douro Valley (Quinta do Vallado, Quinta do Crasto, Niepoort, Quinta Vale D. Maria and Quinta do Meão) – have campaigned together throughout the world since their founding in 2003 to spread awareness about the unique qualities of Douro wines. The five estates represent not only the top level of quality in the Douro, but number among the very finest and most sought-after wine producers in all of Portugal as well. Further information about their individual estates can be found here: www.douroboys.com