ON MONDAY 16 OCTOBER 2017, AT THE BELVEDERE OF THE MOUNT BROUILLY GEOPARK, UNEARTHING OF THE BARRELS BURIED IN APRIL 2016 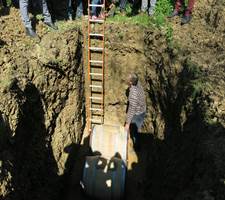 Burying of the barrels – 10 April 2016 – Click here for photographs
AN INCREDIBLE AGEING EXPERIMENT FOR THE SUPERB 2015 VINTAGE IN THIS FANTASTIC TERROIR.
Mount Brouilly was chosen because its offers a remarkable geo-site, a step towards Beaujolais’ impending recognition as the first viticultural Geopark in the world (UNESCO)

THE STORY, A FIRST IN THE WINE WORLD, BEGAN ON THE 10 APRIL 2016 WITH THE “BURIAL ” OF WINES FROM BROUILLY AND THE CÔTE DE BROUILLY.

THERE WERE ONCE SOME WINEMAKERS PROUD OF THEIR HILL…

Three oak barrels were buried and matured underground at 440 metres altitude (Mount Brouilly culminates at 484 metres), at a depth of 1,50 m: one from the Espace des Brouilly (from the producers Domaine Père Benoît, Franck Tavian, Michel Aubry and Patrice Monternier), one from Château de Pierreux and one from the Vignerons de Bel Air.

The particularity of Mount Brouilly is that it forms an isolated summit rising up from the vine covered slopes between Belleville and Beaujeu. The terroir of Mount Brouilly is unique, with a specific geological profile with, amongst other elements, diorite, 400-million-year-old blue stone, the oldest in Beaujolais, and meta-diorite (pink granite) of ‘only’ 300 million years of age!  The earth is rich in ferromagnesian minerals and very poor in quartz. Erosion has had no effect on this hill.

THE INSPIRATION: before departing for distant lands, the nomadic peoples of Asia Minor and Georgia (birthplace of wine) would bury the year’s wines to ensure their conservation.

What will we discover? « Another proof of the capacity of the wines of Beaujolais to age », according to Christian Martray who, after tasting the wines before they went into the earth, stated that « the 3 wines tasted are of immense purity, from a great vintage. The best juice from the best vines in the best barrels (Tonnellerie Jaegle) ». Baptiste Charretier (a young sommelier at the restaurant Le Raisin at Pont de Vaux) will also be present.

What kind of exchange will we see between the strength and the composition of this earth and the wine in the barrel? How will they differ from those aged in the cellar?

THE WINES WILL BE BOTTLED IN NOVEMBER  2017
All the proceeds from the sale of the bottles will be donated to the Rotary Club at Belleville en Beaujolais.
300 bottles will be set aside (100 bottles per barrel), each one with a unique label designed by an artist.
To be sold in December 2017 at the Espace des Brouilly…not to be missed!

Barrel n°2 Château de Pierreux. An Appellation Brouilly from the village of Odenas in the south of the appellation, on shallow and varied siliceous rock. The average age of the vines is 80 years old.

Barrel n°3 Les Vignerons de Bel Air. A Brouilly made from old vines of between 50 and 60 years of age, growing in non-stony soils of ancient alluvial deposits at the foot and to the east of Mount Brouilly.