Success for the first Vinexpo Explorer 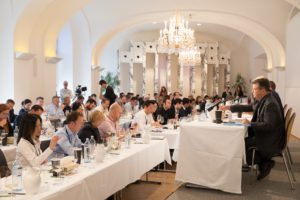 13 September 2017 – The very first Vinexpo Explorer, which took place in Vienna (Austria) on 11 & 12 September, was a hit with all participants. The new concept, combining business and tastings focused on one winegrowing region, proved successful, paving the way for a new approach to business networking.

The 90 buyers, representing a broad cross-section of the international retail market, were handpicked by Vinexpo to give Austrian winegrowers the optimum chance to showcase their wines. Whether importers or sommeliers, e-commerce outlets or hotel chains, Austrian wine experts or not, all took the opportunity to fill their order books.

Austrian Wine, the co-organiser of the first session alongside Vinexpo, was delighted with the event’s international dimension and the opportunities to gain access to new markets. “The mere fact that 46 buyers from the Asia-Pacific region, 15 from the Americas and 28 from Europe came here to Austria was already quite an achievement. Hearing them talk so enthusiastically after two days of tastings and business meetings shows us that Austrian wines have a real place on the world’s best tables”, said Willi Klinger, Managing Director of Austrian Wine.

Vinexpo fully played its part as matchmaker, selecting key buyers and organising the ‘One-to-Wine’ targeted business meetings, which have already proved effective at other Vinexpo shows.

Alexander Shumilov, CEO of Eurowine in Russia, said, “I came here looking to do business and I’ve met some good suppliers who’ll complement my portfolio of wine producers!”

Axel Stiegelmar, owner of Juris, a vineyard in Burgenland, pointed out, “The buyers we meet know they must come to a decision within 30 minutes. Coming here saves us a lot of time as we can sell to importers we would otherwise never have met. This morning I broke into 2 new markets, Thailand and Taiwan, and still have 3 appointments to come.”

Buyers were also invited to reflect on the challenges facing Austrian wines in the international marketplace, such as “The challenge of selling sweet wines” and “Environmental responsibility as a selling point.”

After the two-day immersive experience, another highlight of the event was to give buyers the opportunity to participate in a blind tasting to put Austrian wines in perspective by comparing them with wines from other major winegrowing regions – an exercise that definitively put Austria on the map as a world-class wine-producing region.