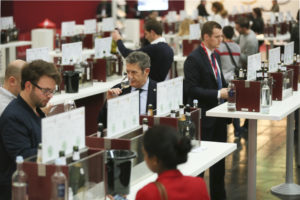 Next year will see ProWein open its doors from 18 – 20 March. With over 6,600 exhibitors from all over the world the international trade fair for wines and spirits is already sold out today. All relevant wine-growing regions in the world are represented providing a complete overview of global wine ranges. Add to this a selection of some 400 spirits specialities.

Newcomers include a joint stand from the Japanese government themed around sake as well as a large stand featuring various Palinka fruit brandies from Hungary. The up-and-coming “craft” theme which is in high demand among ProWein visitors is catered to by the re-designed special show “same but different”. To the tune of 50 exhibitors will exhibit their products such as craft spirits, craft beers and cider. To this end the complete special show will move to Hall 7.0 so that ProWein will have an additional hall at its disposal. Organised by the Meininger publishing house the “fizzz craft Lounge” – the hot spot for barmen – was also drawn to the “same but different” hall – so the international bar and hospitality scene will also find a perfect setting here.

The exhibitors from Greece will also be “rehoused” – at the coming ProWein they can be found alongside Austria and the ProWein Tasting Area by Mundus Vini in Hall 17.

Furthermore, the organic wine area in Hall 13 of ProWein will become bigger and more comprehensive. Here trade visitors will find all relevant organic associations from Germany, Italy and France as well as numerous individual exhibitors from throughout the world. Also charted for growth is the special show Organic World. For ProWein 2018 some 40 international exhibitors will come together here. The organic area will be rounded off by a matching catering concept – the Organic Lounge – as well as a dedicated lecture area.

Hall 9 will also boast an extended and diverse line-up of ranges as now all exhibitors from overseas will be presented here. Overseas groups, such as those from Australia, Argentina, Chile, Canada, New Zealand, South Africa and the USA, will see particularly large increases.

Many exciting and sophisticated add-on ranges

The programme of events accompanying ProWein 2018 is also nothing short of spectacular: numerous tastings are scheduled for the ProWein Forum in Halls 10 and 13. Add to this, a host of events right at the exhibitors’ stands. The spectrum of approximately 500 events ranges from tastings with a national focus to cross-origin presentations like the Tasting Zone organised by the international wine award Mundus Vini. Themed highlights also include the unique Champagne Lounge boasting 40 tradition-rich Champagne cellars. It is located in the centre of the Champagne segment where some further 150 labels are presented. The special “Packaging & Design” show complements the ranges of ProWein showing current trends and developments in packaging.