The 2017 vintage – in Austria, very fine and quite bountiful 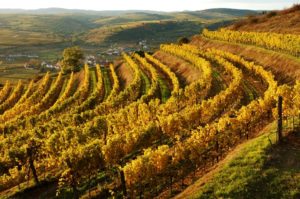 While worldwide 2017 saw the lowest level of wine production in years, Austria was able to record a harvest that was very good in terms of quality and also blessed by abundant volume. The yield of 2.6 million hl (according to October’s third harvest estimate) amounted to a quarter above the five-year average, which will go a long way to filling cellars that in many places have been rather empty. True, there were late frosts in 2017 as well as hailstorms, but both caused substantially less damage than in the previous year. Only the Weinviertel experienced a more modest harvest compared with the average, due to extremely arid conditions in one of the hottest summers in a long time.

The weather in 2017
In general, this year was distinguished by constant fluctuations of temperature, setting meteorological records. 2017 began with the coldest January of the past thirty years, which in addition was also very dry – by contrast, February was extraordinarily warm. This was followed by the warmest month of March that had ever been recorded in 251 years, which resulted in an early blossoming across the vegetable kingdom. Dry conditions that had persisted in the wine-growing regions since the beginning of the year were to continue; in various sub-regions of the Südsteiermark, for example, there was only 1mm of rainfall recorded. In terms of temperature, the subsequent month brought quite the opposite: April was the coolest in nine years; the second half of the month saw a massive incursion of cold air, which brought damage from frost – and not only to the early-blooming apple blossoms. This cold snap in April put the brakes on the vegetation cycle’s two-week head start. In contrast with this, May was warmer than average, and the temperatures rose further in June – it was the second hottest recorded in 251 years, topped only by 2003 (which was about 1°C warmer). A searing heat wave with the accompanying dry conditions in the second half of the month was particularly oppressive.

Arid circumstances were to persist in July, with two hot spells in the wine-growing regions – only after three weeks did an influx of cold air bring a bit of relief and some precipitation, although very little of it to the Weinviertel. And unfortunately, August was very dry as well. In the Weinviertel and in the north of Burgenland, up to 50% less rain fell than is customary. Accordingly, the Weinviertel was forced to endure harvest losses (minus 7% compared with the previous year) while northern Burgenland was obliged to cope with similar difficulties. Many winegrowers attempted – with enormous effort – to save the harvest by irrigating their vineyards, although the application of 1 million litres of water was often, to use the figure of speech, only a couple drops on the hot stone.

Ripening was two weeks ahead of schedule and the harvest had already begun early, but after a third of the picking was done, rain in the subsequent month put a pause in the proceedings. 2017’s cool and occasionally wet September led yet again to an unwelcome caesura in the harvest, but by contrast, October was more obliging, so that the greater part of the wine harvest was already concluded by the middle of the month. The high quality of the grapes also made possible the increase of the maximum yield per hectare on the national level, to the full 20% allowed by law, so that producers affected by the previous year’s shortfall were able to at least partly balance out their losses.

In Austria’s cellars the gratifying quality of the grape material this year made for mostly uneventful vinification, which nevertheless required keenly focussed work. For it is true that many fermentations have their own unique character, which demands keeping a close eye on the process in order to intervene in time should it become necessary. Along with notable varietal aromaticity and clear fruit profiles, the wines are already showing lovely concentration and substance on the palate, which on one hand makes them enjoyable in their infancy, while on the other hand raises hopes for favourable further development over the course of the élevage.

Niederösterreich (Lower Austria)
All told the expectations here, with 1.6 million hl, amount to 19% more than the five year average – only the Weinviertel was made to bear the brunt of the long dry spell. There the yields were limited to 54 hl/ha, while, for example, in the Kremstal more than 73 hl/ha could be harvested, even despite damage from frost. Fortunately, both late frost and hailstorms could cause only minor trouble there this year. A remarkable expenditure of energy in setting out smoke pots was able to successfully combat the frost, while secondary growth and sharp reaction on the part of the growers to the consequences of hailstone damage managed to limit any greater losses. In general, drought conditions posed the greatest problem over the course of the vegetation cycle, since the irrigation of particularly stressed vineyard parcels found its limit in the estates’ labour capacity.

The harvest this year commenced some two weeks earlier than customary, interrupted only by the rainy days in September. Low temperatures and foregoing good health allowed the clusters to withstand the bad weather relatively well. In general, folks are quite content with a well ripened and very aromatic vintage, one in which varietal typicity stands out in particular. In the Thermenregion, Traisental and Carnuntum growers were particularly happy with the quality of the grape must. There it is not only Welschriesling and Grüner Veltliner that will satisfy wine lovers with their fruit profiles and substance, but Zweigelt and Pinot Noir as well are sure to find their way into consumers’ cellars.

Burgenland
Here, growers are very pleased with the above-average harvest volume, amounting to 28% above the five-year average. Happily enough, the inclement weather of recent years had – if any – only localised influence on the course of things. In northern Burgenland a very early start to the harvest brought the additional advantage that September’s rainfall only affected a small proportion of the grapes. So for the most part the picking was already done at the beginning of October, even if there are still a few clusters hanging in the vineyards around Lake Neusiedl in hopes of a Prädikatswein harvest.

In Mittelburgenland as well, the small- and loosely-berried Blaufränkisch clusters, having received the appropriate care, ripened perfectly and were absolutely healthy. One grower describes it like this: ‘A vintage that will remain in memory for a long time – a picture-perfect year.’ The harvested grapes brought good structural acidity with them to the cellars. This made possible a good and clean vinification, posing only a bit of difficulty with the microbiologic challenges inherent to red wines fermented on the skins. The result of this year’s exertions? Very fruit-forward and varietally typical wines, with good and concentrated body, which articulate themselves in a very elegant way on the palate. That which is already a pleasure with the white wines is true for the young reds as well: the ripe and well-balanced acidity supports the fruitiness of the wines, while the medium alcohol content makes for enjoyable drinking. And the wines that are currently maturing in the cellars are sure to gladden the hearts of many when they come to glisten as a finished product in the glass.

Steiermark (Styria)
Following the extraordinarily lean year preceding, here the cellars are finally full once again in the 2017 vintage, with figures pointing to a surplus of 30% compared with the average for the previous five years. Frost and hail could only bring localised damage, with the exception of Schilcherland, where the harvest at the end of August was substantially affected by hail. Apart from this, the weather was fairly comparable with that of Austria’s other wine-growing regions. An early harvest was indeed disrupted a bit by the autumnal rains, but where growers had worked diligently throughout the summer in their vineyards, the clusters made their way into the cellars undamaged and with good quality. Here the harvest concluded in mid-October with picking the grapes for Trockenbeerenauslesen.

For growers in the Steiermark, 2017 is a very elegant vintage with good physiologic ripeness, pronounced aromaticity and intense fruit. Good concentration and substance here are also signs of successful yield management. Whether Welschriesling, Muskateller or Sauvignon Blanc, this year varietal typicity clearly stands to the fore. To sum things up, this vintage will once more finally fill the empty cellars of the growers and then the wine-racks of connoisseurs. To meet with the eager anticipation of young-wine lovers for the vintage, sales of the ‘Junker’ started two weeks earlier than usual.

Wien (Vienna)
This year the wine-growing region Wien was mostly spared by the frost and the hailstorms, while the good summer provided a harvest that was some 35%four higher in volume than the longstanding average. In Vienna as well (in 2017 quite frequently the warmest spot in Austria by monthly average temperature) the harvest began two weeks early, while here too the wet September weather dictated a bit of a break before the harvest could resume. Like in the other regions, weather had a relatively benign effect on the grapes, so that a bounteous volume of healthy clusters found their way into the press houses. Herbert Schilling, Vice President of the Vienna Chamber of Agriculture commented, ‘We are very glad for a wonderful vintage, because this year the quantity is quite satisfactory and the quality is exceptionally fine.’ So wine aficionados can look forward to a full-bodied Wiener Gemischter Satz DAC – and already enjoy 2017’s fruity and intensely flavoured ‘Junger Wiener’.