No impact for global production shortfall on CMS entries

Despite the spring frosts last year, which strongly impacted wine production in France, Spain and Italy, the Concours Mondial du Sauvignon once again witnessed an increase in entries this year. The slight decrease in Sauvignons from some French wine regions was counterbalanced by an increase in entries from New Zealand, Germany and of course the host country Austria, which ranks second, immediately after the leading country, France. 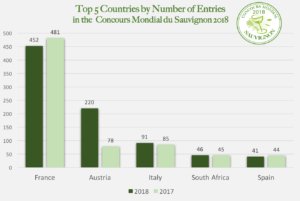 A total 26 countries will compete in Graz this year, including first time contender Albania.

Although wine entries from France dropped 6%, the country still accounts for almost 50 % of total entries with over 450 samples. Fewer Sauvignons were entered by Bordeaux (99 vs. last year’s 143) but there was an increase in wines from the Loire Valley (271 vs. 250) whilst South-West France and Languedoc-Roussillon showed no change.

Austria posted record numbers with a 182 % increase in entries compared to 2017, the highest number of wines it has entered in the competition to date. Almost 90 % of entries came from the host region Styria, famous for its Sauvignon varietals. 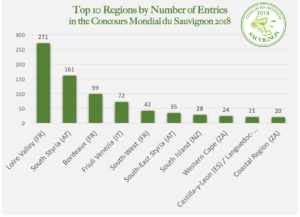 The number of entries from New Zealand started growing again this year for the first time since 2014. Conversely, Italy has been showing steady growth in Sauvignon entries over the past three years with a rise of almost 80% compared to 2016. Germany also entered over five times more wines in 2018 than in 2016. South Africa has entered roughly the same number of wines over the past three competitions, showing only minor year-on-year variations.

Entries from Eastern European countries decreased by nearly 22% on last year. Similarly, wines from Chile posted a drop of 47%, the cause of which could be the wildfires in early 2017, that damaged or destroyed more than 100 vineyards.

The Concours Mondial du Sauvignon will take place on March 2-3, 2018 in Graz, Austria.

The results of this year’s competition will be announced during a presentation at ProWein in Düsseldorf, on March 18 from 2:00 – 3:00 pm in Hall 10.