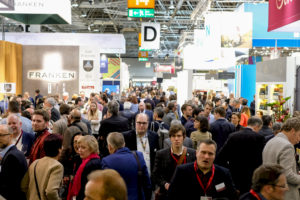 18 to 20 March saw the international wine and spirit industries get together at their No. 1 trade fair, ProWein in Düsseldorf. Over 6,870 exhibitors from 64 countries (2017: 6,615 exhibitors from 62 nations) provided a unique global overview of the current wine and spirits ranges. Over 60,000 trade visitors (2017: 58,500) made use of this platform to place orders and gather information. With these figures ProWein 2018 again hit new top scores. “Whoever has made their passion for wines and spirits their profession simply cannot afford to miss ProWein in Dusseldorf,” says Hans Werner Reinhard, Managing Director at Messe Düsseldorf, summing up the phenomenon ProWein.

ProWein especially convinced the audience with its high international attendance and quality. One in two visitors came from abroad this year – travelling from 133 countries in total to Düsseldorf. Over 70% of visitors come from top or middle management. To all of them ProWein is indispensable. Just under 85% of visitors regard ProWein above all as an order platform, 90% appreciate the intense networking and to 95% ProWein is a key source of information. This year most visitors were especially interested in the new vintages from Germany, France and Italy. There were also top scores for the trade fair overall: one in two visitors confirmed having found new suppliers. Two thirds returned home with helpful information on trends and innovations. Just under 95% stated that they had fully achieved their objectives at the trade fair.

Altogether 6,870 exhibitors from 64 nations were presented at ProWein this year giving trade visitors the opportunity to explore the complete line-up of wines and spirits worldwide over three days. The major wine-growing countries such as Italy (1,700 exhibitors), France (1,550 exhibitors), Germany (990 exhibitors) were represented alongside producers from overseas (700 exhibitors) hailing from the USA, South Africa, Argentina, Chile, Australia and New Zealand. Forming a focal theme this year was the wine country Germany. Released in time for the trade fair was among other things the special publication “Wine made in Germany” featuring all 13 German wine-growing regions and the German exhibitors complete with their tasting programme. Commenting on this Monika Reule, General Manager of the German Wine Institute (DWI) said: “At this year’s ProWein trade visitors from at home and abroad took an avid interest in wines from German wine-growing regions. Especially the lighter but highly refined 2017 vintage white wines were received very well since they are in line with consumers’ current taste. This is why German exhibitors take positive stock as the trade fair draws to a close. They had special praise again for the highly professional trade fair audience.”

There were also many innovations to be discovered in the spirits segment of ProWein. Here to the tune of 400 exhibitors from 30 nations presented their specialties such as exquisite brandies, whiskey, cognac, single malt, grappa or exotic cachaça.

The craft theme was completely re-staged under the heading of “same but different” at ProWein. Craft drinks are fully in line with the current trend in the food service sector and ProWein offers an ideal platform for them. In a trendy atmosphere 76 exhibitors from 15 countries presented hand-picked beers, extravagant spirits and ciders in their own Hall 7.0. “Our new offering was received extremely well. This shows we have our finger on the pulse of the industry here and have succeeded in staging the theme right to the point. We are on the right track here and look forward to expanding the concept even further,” says Marius Berlemann, Global Head Wine & Spirits and Director of ProWein.

The ranges on offer in the organic segment were also broad-based and generated a lot of attention. Here trade visitors were able to meet with all relevant organic growers’ associations from Germany, Italy and France as well as numerous individual exhibitors from all over the world – approximately 300 producers in total. Further details were provided by the special show Organic World. On top of this, the leading German organic associations Bioland, Demeter and Ecovin offered an additional source of information complete with a matching gastronomic concept in the shape of the Organic Lounge.

ProWein is not only THE order platform for the sector. Information also ranked high on the agenda and was highly sought after: to the tune of 500 information events and numerous guided tastings were organised right at the exhibitors’ stands and at the ProWein Forum in Halls 10 and 13. A look at the themed events and hosted tastings of the various exhibitors shows the in-depth knowledge transferred at the trade fair. The event focused on various themes such as Champagne, spirits, craft drinks, organic and bio-dynamic wines, maturity and potential, food and wine pairings as well as on marketing and logistics issues of relevance to retail. To the tune of 70 events revolved around the focal theme “Wine made in Germany”.

ProWein as a Trend Platform

Which themes will play an especially prominent role in the future? This question was also addressed at this year’s ProWein. The ranges showed that there is a trend towards light, uncomplicated wines with a focus on terroir as well as on wines from climatic regions where only 20 years ago growing wines of an appealing quality was impossible such as Denmark, Poland and the UK. These and other trends had also been defined by ProWein’s new trend scouts who shared them with trade fair visitors at the ProWein Forum.

ProWein goes City: all of Düsseldorf succumbs to ProWein Fever

While industry professionals are amongst themselves inside the exhibition halls, Düsseldorf also succumbs to ProWein fever outside. Numerous vintners presented their “noble drops” at trendy venues after trade fair opening hours. Under the heading “ProWein goes City” 110 events were organised at restaurants, hotels or specialist retail stores that all revolved around wines and spirits. The spectrum ranged from a Slovenian wine evening and a culinary wine author’s reading to a kitchen party involving top-notch vintners.

Where do we go from here?