Sting inducted by the Saint-Emilion Jurade 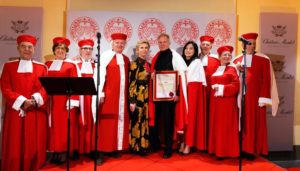 Château Monlot, owned by the Chinese actress Zhao Wei and advised by Jean-Claude Berrouet, the former oenologist of Château Petrus and world-acclaimed winemaker, celebrated its renewal on 6th April after extensive renovation work.
This inauguration evening featured a red carpet, a firework display, video mapping of the history of the estate on the Chateau façade, singers and performers mingling with the guests during cocktails and dinner concocted by the 3-starred Chef of the Four Seasons Hotel George V in Paris, Christian Le Squer. The evening gave a taste of the level of ambition that the estate’s team has to raise this 8-hectare (20-acre) Saint-Emilion Grand Cru property on a par with the best.
To highlight the evening, Zhao Wei had invited her friend and star guest, Sting. The Jurade, which had already inducted the actress in 2012, was delighted to welcome Sting to its ranks during the evening. The emblematic lead singer of the band The Police, who went on to develop a hugely successful solo career, is also a fervent defender of the environment (he is a co-founder of the Rainforest Foundation) and great wine lover. In 1995, with his wife Trudie Styler, he bought the Il Palagio estate in Tuscany, where he makes organic white, rosé and red wines, one of which bears the name “Message in a Bottle”. During the evening at Château Monlot, he delighted guests by singing this world hit, having donned the Jurade epitoga. This was a unique, timeless experience, when emotions ran high amongst the guests, who were all moved by their luck in witnessing this love song addressed to Saint-Emilion wines and their growers