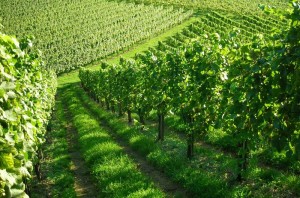 Difficult weather conditions during the flowering period combined with a prolonged drought with consistently high temperatures during vegetation, will likely result in the fourth consecutive Austrian wineharvest with a below-average yield. A volume of 2.4 million hectoliters is expected for the 2013 harvest. But because high temperatures in July and August spurred a rapid ripening process, very ripe grapes – just like last year – are expected. The rainfall end of August came at just the right time for the smooth continuity of grape ripening.

Despite the relatively late bud break and bad flowering conditions, the delay in vegetation development has been offset – thanks in part to the moist soils from a wet winter and to the overall high temperatures during the summer. However, many young vineyard sites with shallow, permeable soils have suffered greatly because of the prolonged summer heat and drought conditions. Fortunately, the rainfall in the last days of August has been extremely important for the continuity of the rapid grape ripening process.
In the Seewinkel area of Burgenland, the harvest of early-ripening grape varieties – those mainly used for sturm – is already underway. The beginning of the main harvest is expected in mid-September for Burgenland, and in early October for Niederösterreich (Lower Austria) and Steiermark (Styria).

The drastic change in weather conditions during the flowering period, from heavy heat to cold and wet, resulted in considerable fertilization problems – coulure – especially with the flagship variety, Grüner Veltliner. Affected most were the regions along the Danube river, such as the Wachau, Kremstal and Kamptal, as well as some parts of the Weinviertel. Some areas of other regions also suffered from coulure damage. Overall, coulure is responsible for contributing to a harvest that this year will be slightly below-average in quantity.

Besides coulure, hail left deep marks on several Austrian vineyards. An early hailstorm on May 4th in Mittelburgenland (also known as “Blaufränkischland) caused severe damage in the vineyards there. And by late August, around 2,500 hectares of vineyards throughout Austria (1,200 ha in Niederösterreich; 1,100 in Burgenland and 200 in Steiermark) had been bombarded by hail, with damages totalling approximately € 5 million.
Fortunately, frost did not cause any significant damage this year, especially compared to what the historic frosts of 2012 had delivered.