THE OLDEST HERBARIUM OF GRAPEVINE VARIETIES IN THE WORLD 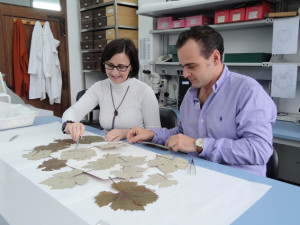 A team of researcher from the prestigious Consejo Superior de Investigaciones Científicas (CSIC) [Spanish National Research Council] will study the oldest herbarium of grapevine varieties in the world, in collaboration with José Estévez, one of the main winery groups in Andalusia (Spain), which exports its products to 30 markets on five continents and owns nearly 800 hectares of vineyards.

The project is lead by CSIC researcher María del Carmen Martínez (Misión Biológica de Galicia), who will use ampelographical techniques and DNA to identify the varieties of grapevines in the herbarium, which has been preserved since 1802 in the Royal Botanical Gardens of Madrid, in order to determine exactly which varieties are currently grown and which have disappeared. Joining the effort are researcher Mauricio Velayos, of the Madrid Botanical Gardens, and a research group from INRA-Montpellier (France), under the direction of Jean-Michel Boursiquot.

“The data collected so far indicate that this is the oldest herbarium of cultivated grapevines in the world,” indicates Martínez. The next oldest, he adds, would be that preserved in France, which dates back to 1870. 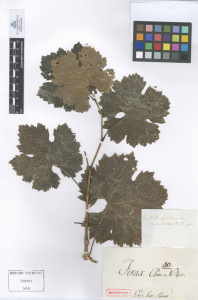 The herbarium created by Simón de Rojas Clemente y Rubio consists of 186 herbarium sheets, each including the leaves and dried buds of a specific variety. All the samples were collected in areas of Andalusia. Since then, they have been kept at the research center in Madrid, along with more than 1,000,000 different specimens, which make up the largest herbarium of vascular plants.

Simón de Rojas Clemente was the first to apply the scientific method to the study and description of the cultivated varieties of grapevines, and is thus considered to be the world’s first ampelographer. In 1807 he published a book establishing a method for description that was subsequently translated and imitated by experts around the world. “As a matter of fact, practically all the parameters that he established are still being used today, since they form part of the official code for the description of grapevine varieties of the International Grapevine and Wine Organization, of which 46 countries are members,” indicates Martínez.

Clemente includes in his book the description of a large part of the varieties preserved in the herbarium, but his habit of giving them names dedicated to authors or even making them up does not allow us to know exactly which ones they are, Martínez argues. “Therefore, being able to complete the descriptions in the book with new ampelographic and molecular studies performed directly on the material from the herbarium will allow us to know which correspond to current varieties and which may have disappeared,” the researcher explains.

José Estévez, formed by the wineries La Guita, Marqués de Real Tesoro and Valdespino, exports to more then 30 countries on five continents, including the United States, Canada, Russia, Japan, China, Mexico, the United Kingdom and the Netherlands, among others.