THE FRENCH LABORATORY EXCELL PUTS A LOT
Thanks to the pressure exercised on the industry of the corking during the last twenty years, the frequency of “cork taints” communicated with wines by the 2,4,6-trichloroanisole (TCA) contaminating the cork considerably decreased. If it is difficult to have really nice and representative statistics, it is undeniable that the evolutions in the field of the manufacturing and of the quality control by the corkers lowered the frequency of contamination from 5-7 % on average (and sporadically much more) to now around 1-2 %, even less with certain technical corks. The 1 % frequency remains still difficult to sink in, in particular with natural corks ; this level always represents a potential of considerable change. Then, one of the most striking phenomena observed for the last ten years is the important reduction of the content in TCA potentially extractible of the corks by the wine. The caricatural contents, capable of communicating enormous “musty” intensities of defect, are more and more rare, we measure today weaker contents in releasable TCA today. But is it necessary to be delighted at it?

The TCA act as a suppressor of olfactive detection
Indeed, recent works regarding neuro-perception (1) enlighten a phenomenon known (2) but, up to there, badly explained, namely that of small quantities of TCA, not detectable as such, because lower than the threshold of perception of the molecule, are for all that capable of affecting very negatively the aroma of the wine. The TCA act as a suppressor of olfactive detection. In ultra-low concentration, it is enough to switch off literally the aroma of wines and to return it, if it is not bad, the worse still, completely commonplace… We cannot then blame with obvious fact the cork to be responsible for this “lack of quality” ; there is not “critical defect” anymore because no obvious exogenous aroma can be identified even by a warned wine taster. It is thus from now on the wine which will be criticized.

The situation still complicates when, in from now on tracks of TCA extractible, get involved in quantities always very low (some billionths of gram) of 2-methoxy-3,5-dimethylpyrazine or more simply MDMP. This molecule communicates with wines with strong concentration a typical smell of…cork bark. It is produced in particular by a bacterium stemming from the ground identified by EXCELL (3). The analyses of frequencies of contamination (3,4) realized by EXCELL and very recently confirmed by other sources(springs) (5 ), tend to worry us seriously… They demonstrate that, if the TCA is on the way to become a minority contaminant in the cork, the disturbing contents of MDMP would affect a much wider quantity of the of cork batches launched on the market (>10 %of the batches with high risk).

Furthermore, exactly as the TCA, this molecule with a too weak concentration to communicate a defect obvious by tasting, provokes the total extinction or quite at least a deep modification and always negative, of the wine flavor. Without we can identify an obvious defect, it will be once again the wine itself that we shall reject!

LABORATORY EXCELL is the first laboratory in the world to propose from now on besides the classic analytical control of the releasable TCA from corks, the possibility of measuring the TCA and all other dangerous anisols at the ultra-traces level (0,5ng/l) and of quantifying the content of MDMP existing in the same corks to estimate better the risks of pollution in the light of the new knowledges and the new challenges (Check List Bouchon Excell ™, www.labexcell.com).

Reference papers as .pdf can be downloaded from http://www.labexcell.com/categorie/publications/ 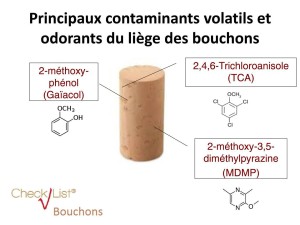